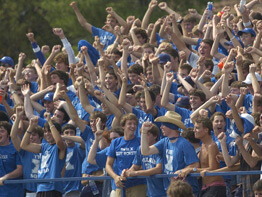 WASHINGTON – A list of football powerhouses among Catholic colleges in Division I of the National Collegiate Athletic Association would probably start with Notre Dame and end with Boston College.

But a similar list for Catholic high schools would require a lot more paper.

Nine Catholic high schools are in USA Today’s “Super 25” rankings – including four in the top 10. The rankings were published in the newspaper’s Aug. 22 issue.

St. Xavier High School in Cincinnati tops all Catholic schools with the fourth spot in the preseason rankings. It’s the highest-ranked school – Catholic, public or private – that didn’t go undefeated last year; it finished 10-2 in 2006.

DeMatha High School in the Washington suburb of Hyattsville, Md., was ranked fifth. It went 12-0 last season. Its first game was set for Sept. 2 in Cincinnati against St. Xavier.

De La Salle came out on the winning end of the only two No. 1-vs. No. 2 matchups since USA Today started ranking high school football teams 25 years ago. In 2001, it beat No. 1 Poly High School from Long Beach, Calif., 29-15 with the help of four touchdowns from junior running back Maurice Drew, now with the National Football League’s Jacksonville Jaguars. In 2002, No. 1 De La Salle beat No. 2 Poly in a rematch, 29-7. The win was the 129th in a row for De La Salle, which won 151 straight before a loss in 2004.

Some Catholic high schools left out of USA Today’s national rankings found places in the paper’s regional rankings. In the East, St. Joseph’s Prep, Philadelphia, was fifth, and St. Peter’s Prep, Jersey City, N.J., landed eighth. In the West, Jesuit High School in Portland, Oregon, was ranked seventh. No Catholic high schools outside the national preseason top 25 got ranked in the Midwest or the South.
Not only are schools ranked; so are the players. One Web site, rivals.com, places two student athletes from Catholic high schools in its top 10: Darrell Scott, a 6-foot, 204-pound running back at St. Bonaventure High School in Ventura, Calif., second, and Will Hill, a 6-foot-3, 203-pound multiposition player at St. Peter’s Prep in Jersey City, seventh.