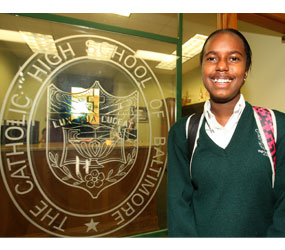 A cracker started rolling off a microwave oven in Tricia Matthews’ Baltimore kitchen.

A few feet away, her 13-year-old cousin, Giliane Lafontant, was startled.

“Why is that moving?” the girl snapped.

Since Jan. 12, few things have been stable enough for Lafontant. Every darkened room or noise pierces her psyche. In times of uncertainty, of which there are many these days, she finds comfort in Matthews, a lifelong Catholic.

Two months ago, Lafontant was a passenger in a car in her native Haiti, heading toward a dance class. The earth beneath her started shaking. Cars shook violently and a house collapsed in front of her. Screams of pain dominated the air. Later, Lafontant saw a woman whose head had been decapitated.

A magnitude 7 earthquake at the heart of Port-Au-Prince and its surrounding neighborhoods was irreparably changing lives, like Lafontant’s.

Her Petionville home was severely damaged, as were nearby schools. Born in New York, her departure from Haiti and toward security was paramount.

By mid-February, she was wearing the uniform of The Catholic High School of Baltimore and walking its halls as a freshman. Lafontant shared her story of survival Feb. 23 with Deacon Rodrigue Mortel, director of the Baltimore Haiti Outreach Project. On behalf of Archbishop Edwin F. O’Brien, he formally welcomed her to the Archdiocese of Baltimore.

“Everyone saw too much,” Deacon Mortel, a Haitian-born physician, said of hearing Lafontant’s story.

Catholic High’s sponsoring order, the Sisters of St. Francis of Philadelphia, is covering Lafontant’s tuition for the remainder of the year.

The school is in the process of finding sponsors for her three remaining years. Catholic High’s tuition, which is $10,500 with fees this year, is among the lowest in the archdiocese.

Various members of the Catholic High community have provided backpacks and other school essentials for Lafontant, as she adjusts to the U.S.

“We are most pleased to welcome Giliane to our school community,” said the school’s president, Barbara D. Nazelrod. “We are confident that she will quickly acclimate to our school and culture and do well academically at Catholic High. Having Giliane at Catholic High brings to life for all of us the horrible tragedy and devastation of Haiti and it is an honor to have her with us.”

Lafontant’s mother, Maria Lourdes Lafontant, sought help from family members in Baltimore, saying Giliane’s education was a priority. Matthews, 25, and Lafontant share a maternal grandmother and had seen each other many times.

“Everyone didn’t know what to do,” Matthews said of the search for a school for Lafontant. “We didn’t know who was available, who could take her. There were just a lot of factors.”

Matthews found all-girls Catholic High to be a perfect fit and the school administration welcomed the new addition.

Matthews, who has a 10-month-old daughter, is a nuclear medical technician at Mercy Medical Center and taking classes at the Community College of Baltimore County, but didn’t think twice about housing her cousin.

“Everyone says thank you, but I don’t feel that’s necessary” Matthews said. “I feel like for us, that’s just our duty. You don’t really think twice about it.”

Deacon Mortel said: “That is the courage of the Haitian people. You take people in and the culture is such that any guest gets the best.”

Lafontant’s arrival at Catholic High was delayed by several snowstorms, but she quickly found her niche once classes resumed. Creole French is spoken in Haiti, and she has dazzled in advanced French classes.

“According to our French teacher, she’s the best student in class,” said Marcy Shea-Frank, Catholic High’s director of institutional advancement.

Other classes, like biology, are harder because of her tentative English, but the Catholic High community promises to be there, assuring her.

“We’re just so happy to have her and we wish we could do it for more,” Shea-Frank said.

Lafontant walks gingerly into her new life with wide eyes.

“I feel safe here,” she said through Deacon Mortel. “I don’t feel the aftershocks anymore.”

For more about Lafontant, Deacon Mortel’s thoughts on Haiti’s future and how you can help, visit MattPalmer’s blog at www.CatholicReview.org.