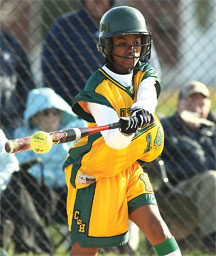 Head Coach Ed Hoffman knows his team and what it’s capable of doing this season in the IAAM B Conference softball league.

The Catholic High School of Baltimore’s Cubs is noted as a team to watch this season, sporting a balanced squad deep in skill and packed with energy to go the distance.

Hoffman is in his fifth year with the team, coaching 20 years overall, and he thoroughly enjoys coaching women’s softball. For him, the game is special and so are his 2008 players.

The team is out to a 1-1 league start, one 11-6 victory over Annapolis Area Christian School and one down-to-the-wire 12-10 loss to McDonogh School, Owings Mills. This says one thing about the 2008 Cubs: They can hit, and they do not knuckle under when the pressure mounts.

The 15-player squad is led by five seniors and two freshmen, but Hoffman noted that this squad is based on team effort and all players contribute.

Starting pitcher, sophomore Meagan Sumwalt combines four pitches effectively and is strong both defensively and at the plate. “Meagan knows how to get on base. She’s a very good singles hitter but also has some strength,” said Hoffman.

And though Sumwalt is a pitcher, she also relieves starting catcher, junior Jackie Dillard when relief pitcher Amber Hilditch, a freshman, comes in.

Leading the Cubbies’ offense is shortstop Kate Ratych, a junior. Batting fourth, Ratych is hitting around the .400 mark and displays long-ball power at times. Ratych can also cover ground in the middle of the field, commits very few errors and flawlessly turns double plays with second-baseman Ana Pyzik, a senior captain.

Lead-off hitter and senior captain Julie Huff has excellent speed, leads the team in steals with more than 30 stolen bases in 2007, and looks to be effective again in 2008. The other team captain is third baseman Marilyn Topper.

Also contributing to the offense early this season is freshman outfielder Paige Lauenstein. In fact it was Lauenstein who went four for four in the McDonogh game that kept the Cubs close.

Coach Hoffman also commented on sophomore Ashley Bloom, who just moved from second base to first base this season. It looks like this is the best fit for her and the team with a long reach and solid target.