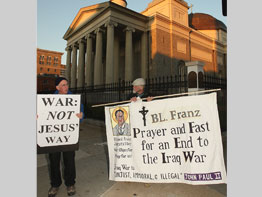 “Jesus calls us to be peacemakers in the midst of a violent world,” the Franz Jagerstatter People for Breaking the Silence said in the letter.

The group – named for an Austrian peasant beheaded for refusing to serve in Hitler’s army and beatified by the church last year – urged the bishops “to condemn war in a loud and clear voice as immoral and contradictory to the teachings and life example of Jesus Christ.”

The letter, sent as the U.S. Conference of Catholic Bishops met in Baltimore, said the bishops should:

• Teach Catholics of all ages that Jesus calls his followers to be nonviolent.

• Initiate education programs in every diocese so young Catholic men and women will form a conscience “founded on Holy Scripture and not take up the sword in wanton killing and destruction.”

• Help fulfill the message of Isaiah – “and they will train for war no more” – by removing all ROTC programs from Catholic schools in America.

• Call on the Catholic Church to fast and pray for the intercession of the Holy Spirit to “renew the face of the earth, where love and justice prevail without war and violence.”

“We welcome that statement as helpful,” the letter said, “but urge you to use the substantial power and blessings you hold to bring the full church into unity with you on the ‘ethics of exit.’ ”

The Franz Jagerstatter group, along with Pax Christi Metro D.C./Baltimore, sponsored a speech the evening of Nov. 11 by Joshua Casteel, who had served in an Army intelligence unit in Iraq in 2004 and was an interrogator at the Abu Ghraib prison.

and that his own participation in the war compromised his Christian witness, Mr. Casteel applied for and received conscientious objector status and left the Army.

Mr. Casteel, who met Pope Benedict XVI briefly at the Vatican on March 14, 2007, is to speak at 7 p.m. at Ss. Philip and James, Charles Village.