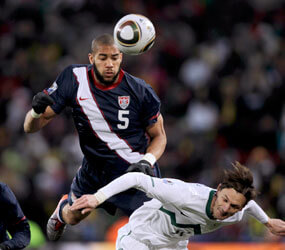 WASHINGTON – In the fall of 1995, a thin, fast soccer player named Oguchi Onyewu, wearing No. 5 on his red- and black-striped jersey, helped lead St. Andrew Apostle Parish in Silver Spring, Md., to a 4-1 win in the Catholic Youth Organization’s varsity Mid-Atlantic Championship in Washington.

His team later won the regional CYO title in Philadelphia.

This summer, Onyewu, still wearing No. 5, competed for the U.S. men’s national soccer team in the World Cup in South Africa. Now tall and strong and built like an NFL player, the defender returned from a serious knee injury for the team’s opening match against England, one of the tournament’s favorites.

Playing with skill and tenacity, Onyewu helped neutralize England’s dynamic offense, and the United States gained a 1-1 tie that proved crucial so the team could later advance to the round of 16. The U.S. team’s World Cup showing was one of its best in decades.

In a July 12 interview on the day after Spain beat the Netherlands, 1-0, for the World Cup title, Onyewu spoke about his own personal journey, which has been not only a story of athletic accomplishments but also an ongoing journey of faith.

Onyewu, who had recently returned home to Maryland from South Africa, watched the World Cup championship game, then went to Mass afterward with his brother Nonye at his family’s parish church, St. Paul in Damascus, Md.

After Mass, the pastor, Father Joseph Pierce, shook hands with the brothers and welcomed them home, congratulating Onyewu for what he and his team had accomplished in the World Cup.

Some parents and children who had attended the Mass also walked up to the athlete afterward to shake his hand, and Onyewu smiled and chatted with them. As on many Sundays, the congregation included youths still wearing their soccer uniforms.

About one month earlier at the same late-afternoon Sunday Mass, days before the opening games of the World Cup, the pastor had encouraged parishioners to cheer for, and pray for Onyewu, whom he proudly described as “one of our own.”

In his interview with the Catholic Standard, Washington’s archdiocesan newspaper, Onyewu said his education at St. Andrew the Apostle School in Silver Spring, which he attended from preschool through eighth grade, “helped a lot in terms of discipline … being instilled on a daily basis with religious values and with life values.”

Now 28, the athlete said his Catholic faith remains a source of strength for him. In good times and in hard times, “my faith gets me through,” he said. Onyewu described himself as an “avid Catholic” who goes to Mass every Sunday. His faith is important to him, he said.

“I’m a firm believer in God and his ultimate plan. I’m thankful for all his blessings and for the crosses he allows me to bear. I look upon that (the crosses) as a benefit. Everything is a learning experience,” Onyewu said.

He credits the example of his parents, Peter and Dorothy, for their influence on him and on his two brothers and two sisters. Onyewu’s father played soccer in Nigeria before moving to the United States and attending Howard University.

“I am what I am and who I am because of my parents,” Onyewu said. “They are avid Catholics. Their teaching molded us to be family-oriented and close to each other.”

After playing soccer at Clemson University in South Carolina, Onyewu played professional soccer in Belgium and signed a contract with AC Milan, one of Italy’s most prestigious teams. He is looking forward to returning to the Italian team after being sidelined with his recent knee injury.

Onyewu, who also played on the U.S. team at the 2006 World Cup in Germany, said the 2010 World Cup was especially meaningful for him. With his family roots in Africa, he was honored to participate in the historic first World Cup championship on the African continent.

“It was special, (and) I cherished every minute of it,” he said.