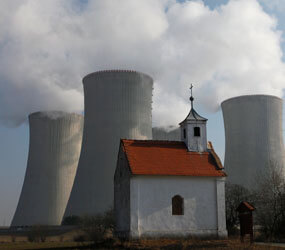 LIMA, Peru – The ongoing nuclear plant disaster in Japan raises not only environmental and health issues, but ethical questions about energy use and the future of nuclear power, according to Catholic scholars and other ethicists.

The accident could be a “huge wake-up call” that would “give impetus to jump starting massive research” in other energy technologies, such as solar and wind power, according to William French, director of the Center for Ethics at Loyola University in Chicago.

As Japanese technicians struggled to control damage at four of the Fukushima Dai-ichi’s six reactors, Switzerland said it was halting plans for new reactors, while other countries, including the United States, announced reviews of plants.

Still others, however, said they would forge ahead with nuclear energy plans. On March 18, just before U.S. President Barack Obama arrived for a one-day visit, Chile signed an agreement with the United States to promote nuclear energy in the South American country.

Questions about the safety, cost-effectiveness and long-term prospects for nuclear power are familiar to Bob McKeon, associate director of the Office for Social Justice of the Archdiocese of Edmonton, Alberta.

Less than two years ago, the bishops of Alberta wrote a pastoral letter urging “serious discussion and ethical reflection” about a nuclear power plant that Bruce Power proposed building beside the Peace River in northern Alberta.

The bishops asked if there was enough water available for the plant, if nuclear energy was the best way to decrease Alberta’s greenhouse gas emissions, if the safety of future generations was being considered, if the plant should be built before Canada had a nuclear waste storage plan, and if subsidizing nuclear energy was the best use of government funds. They also called for honest consultation of people living near the proposed site.

The disaster in Japan shows that “the questions are still there,” McKeon told Catholic News Service.

Accidents at Three Mile Island in Pennsylvania in 1979 and Chernobyl, in what is now Ukraine, in 1986 triggered “deep fear” about nuclear energy in many countries, French said.

In recent years, however, concern about climate change and calls to reduce the use of fossil fuels like oil and coal, which emit greenhouse gases that contribute to global warming, led some policy makers to take another look at nuclear energy.

“It’s not a black-and-white issue,” Jesuit Father Thomas Reese, a senior fellow at the Woodstock Theological Center at Georgetown University, Washington, told CNS. “Like most really tough ethical (issues), you’ve got lots of questions to consider, and there are lots of uncertainties.”

While nuclear energy could be “part of the solution” to climate change because radioactive fuel does not release greenhouse gases, “if something goes wrong, thousands of people could be killed and land could be unusable for centuries,” Father Reese said.

Critics, however, say that painting nuclear power as free of greenhouse gas emissions is misleading, because it considers only plant operation. If the entire fuel cycle, from mining through processing, is considered, nuclear energy’s carbon footprint increases significantly.

So does the cost. A single plant can cost more than $5 billion. Since the commercial nuclear energy industry rose from the ashes of the atom bomb in the 1950s, research and development and plant construction have received hefty government subsidies.

Nuclear energy companies receive tax breaks, loan guarantees, limits on liability and other subsidies that sometimes add up to more than the power the plants produce, said a 2011 report by the Union of Concerned Scientists.

The U.S. Government Accountability Office reports that between 2002 and 2007, nuclear programs in the United States received $6.2 billion in government funding for electricity-related research and development, compared to $3.1 billion for fossil fuels and $1.4 billion for renewable energy, especially solar.

If subsidies are not counted, electricity from natural gas is cheapest, followed by hydroelectricity, conventional coal technology, wind, geothermal, biomass, nuclear and solar energy, according to the U.S. Department of Energy.

Some experts say that if renewable energy sources received the same subsidies as nuclear power, they would quickly become more competitive. Although wind turbines and solar panels are made of materials that cause pollution during mining and manufacturing, proponents say they do not raise long-term safety concerns like those surrounding nuclear waste storage or reactor safety.

Public reaction to the accident in Japan “is going to be a big hurdle to get over – it’s an emotional reaction,” he said, but he believes plants can operate safely as long as countries take proper precautions.

The Japanese plant was crippled not by direct damage from the earthquake or tsunami, but from of loss of electricity for the system that cooled fuel rods in the six reactors and seven pools holding spent fuel. Diesel fuel for backup generators was stored in above-ground tanks that were swept away by the tsunami – a design flaw not repeated in the United States, where tanks are underground, McAssey said.

But a second, battery-powered backup system was designed to operate for only eight hours – not long enough to restore electricity to the plant. And the backup systems did not power the spent fuel pools, where fuel rods overheated and may have partly melted.

“The danger is to pretend that we can tame this complex technical beast by making it even more complex,” he told CNS.

One solution is to reduce energy consumption, he said, which means recognizing that “our individual lifestyle choices have public ramifications.”

French and Father Reese called for taxes or restructuring of energy prices to reflect all costs – including environmental damage and the cost of military operations to protect foreign oil fields – instead of only production costs.

To broaden the debate, Briggle suggested forming a national energy task force of scientists, ethicists and citizens, which would operate like the president’s National Bioethics Advisory Commission.

French said it is time to take a hard look at energy use. The global population quadrupled in the past century “and is consuming at a much, much higher level” than ever before, he said. “We have a rising global expectation of consumption that the planet cannot sustain.”