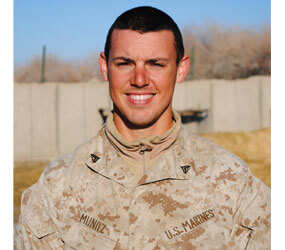 COMBAT OUTPOST SPIDER MONKEY, Afghanistan – Like all Marines, Cpl. Matthew Munoz is there for his buddies, but the 23-year-old also has stepped forward to help tend to the spiritual well-being of his comrades in arms.

Munoz is second in command for his squad of about 14 men; he is assistant patrol leader with the Marines’ 1st Battalion, 3rd Marines, Alpha Company, Weapons Platoon at this combat outpost deep in Afghanistan’s Helmand province – Taliban territory.

He also serves as the company’s Catholic lay leader, combining his Catholic faith and special training provided by a military chaplain to serve as a faith presence for Catholics and non-Catholics at the camp where the men sleep in unheated tents, have no showers, and use plywood with holes over barrels as toilets.

There’s no shortage of razor wire, sandbags and dust, and the cocoa-colored earth is deep in mud where pools of water formed from the last downpour. Temperatures surpass 130 degrees in summer and fall below freezing in winter.

Munoz told Catholic News Service that when his “very religious” mother and devout Catholic father separated, he went with his father to San Diego. At age 15 he entered the Catholic Church during the Easter Vigil at San Diego’s St. Mary Magdalene Church. He prayed more, joined the parish youth group and became an altar server.

When his father died, and he moved in with his aunt, Teresita Munoz, in Coos Bay, Ore., where he continued as an altar server and graduated a semester early from high school.

“I enlisted a week after graduating,” the 6-foot, 200-pound Marine recalled. “My mom’s side of the family was big into the military, but had no Marines. I wanted to be the first. My grades were more than par” for college, he said, “but I guess everybody wants to be a hero.”

Munoz’s first deployment was to Iraq, where “there was only one chaplain for about 1,000 of us, and he always looked tired,” he recalled. His gunnery sergeant asked if he would volunteer to become a lay leader to help fill the need.

“I said yes. I consider it a privilege,” Munoz said. A battalion chaplain then trained him, providing tips on how to spot Marines needing special support and how to help and encourage them.

“Sometimes it’s as simple as praying with them,” he said.

Munoz also received training in providing Catholic liturgies, such as those he leads for up to 10 men each Sunday near Spider Monkey’s canopy-covered chow tables.

“We’ll begin with a Hail Mary or Our Father, give thanks in prayer, pray for the … military and world,” followed by an inspirational reading. “We always use the Bible” and sometimes use readings from Shakespeare or sayings of the saints, “anything eloquent, holy and wise.”

Then the participants share stories to uplift and encourage one another.

The liturgies end with more prayers, including one for a quick, safe trip home.

Pre-consecrated Communion wafers are not distributed, he said, because the Military Archdiocese banned the practice after desecration that allegedly occurred in Iraq.

“I miss the Mass,” Munoz said, noting that he has not had access to the Eucharist since his deployment in November.

He should return home in June and plans to pursue a career in personal fitness training.