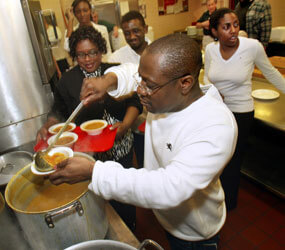 WASHINGTON – In the weeks since Haiti’s Jan. 12 earthquake, major Catholic relief organizations have been on the ground in Haiti helping with medical care and food provisions, and financial donations have been pouring in from Catholic dioceses, schools and colleges.

But also scattered throughout the Caribbean country are small groups of volunteers – many from U.S. parishes and small aid groups – doing what they can to help it get back on its feet.

One of these groups, a medical mission team from St. Matthew Parish in Franklin, Tenn., spent two weeks in Port-au-Prince setting up roadside clinics for Haitian earthquake victims.

Lynn Blair-Anton, a nurse with the team, said that even with international medical personnel spread throughout Haiti’s capital city, there were few professional counselors available, something she said was “very much in need by everyone who survived this horrific disaster.”

“There is far too much death here. Too many lives turned upside down and shaken around. Too much destruction,” Blair-Anton told the Tennessee Register, newspaper of the Nashville Diocese.

And the hardships were not limited to Port-au-Prince.

Deacon Jim McKenzie from the Cathedral of the Incarnation in Nashville arrived in Haiti in late January with food and medical supplies for the cathedral’s sister parish, St. John the Baptist in LaVallee, about 50 miles west of Port-au-Prince.

Although the village is far from the earthquake’s epicenter, he said many people there said they could not sleep or eat and were nervous about going back into buildings.

During his long working days in the outskirts of Port-au-Prince, Deacon McKenzie, who is a nurse anesthesiologist, treated injuries and comforted patients.

Ursula Heitz, a registered nurse and leader of the St. Matthew team, noted that “all resources have to be stretched, and they’re almost at the breaking point now.” She said international aid remains focused on the hardest hit area of Port-au-Prince but the “the rural areas really suffer.”

Pam Charles, a nurse and parishioner of Our Lady of the Assumption Parish in Beloit, Wis., was in Haiti with a group of six women volunteering for Health Ministries for Haiti, a nonprofit Christian group, when the earthquake struck.

Since then she has been trying to raise money for the group’s orphanage in Croix des Bouquets, near Port-au-Prince. Charles told the Catholic Herald, newspaper of the Diocese of Madison, Wis., that the walls of the orphanage building collapsed during the quake.

The 56 children at the orphanage – ranging in age from 18 months to 16 – survived, although they are now sleeping outdoors. Health Ministries for Haiti – www.healthministriesforhaiti.org – hopes people will send donations to sponsor children at the orphanage each month but currently needs donations to purchase food until there is a permanent food distribution plan in the country.

Many groups that were already working in Haiti have continued to do so since the earthquake. Members of a Philadelphia-based charity called Father Chuck’s Challenge visited Haiti last year and planned to visit again this winter to develop a fishing project in Haiti.

Monsignor Francis Schmidt, coordinator of the charity, said the group is working through Food for the Poor, a Florida-based international Christian relief organization, to convert Neply, a coastal village near Port-au-Prince, to a fishing village using a $60,000 grant to supply boats, gear, training and an on-land storage facility. The project was designed to provide jobs and also to contribute part of the fish catch to the poor and elderly.

After the earthquake, plans for the fishing village changed to another location, the village of Bausan, and now may also include housing. Neply was heavily damaged, the partially built storage facility was destroyed and many of the villagers left after the quake.

Across the United States, Catholics have contributed to smaller-based relief efforts and to Catholic Relief Services, the U.S. bishops’ overseas relief and development agency. By early February, CRS had raised more than $38 million for its emergency response in Haiti.

St. Bridget School in Philadelphia, which has 206 students in preschool through eighth grades, raised more than $767 toward relief efforts in one day, according to principal Susan Canio. Kindergartner Taron Stokes, 5, donated the $5 he had received from the tooth fairy.

“I’m going to give it to Haiti to help the kids,” said the youngster, who added that he would buy the children clothes, shoe and other items if he could.

Parishioners and students in the Archdiocese of Newark, N.J., contributed $1 million to Haiti relief.

In the Diocese of Metuchen, N.J., St. Stanislaus of Kostka Parish in Sayreville held a soup-night fundraiser that drew 440 people and raised $10,300.

The parish served Haitian Freedom Soup, or soup joumou, typically served by Haitian families on the first day of the new year. It is a pumpkin soup that Haitian slaves prepared for their French masters but were forbidden to eat themselves until Jan. 1, 1804, when they rose up and overthrew the French colonists, creating an independent nation.

Other fundraising efforts have included:

– “Hats for Haiti” week in late January coordinated by the Holy Childhood Association in the Archdiocese of Los Angeles. Students raised $350,000 by paying to wear hats to school for a week.

– “Hounds for Haiti” donations, named for the Greyhounds athletic mascot at Assumption College in Worcester, Mass.

–”Streaming Hope for Haiti,” a 24-hour fundraising broadcast on the radio station of Cabrini College in Radnor, Pa.

Contributing to this story were Theresa Laurence in Nashville, Pat Casucci in Madison, Kathleen Ogle in Metuchen, and Christie Chicoine and Lou Baldwin in Philadelphia.