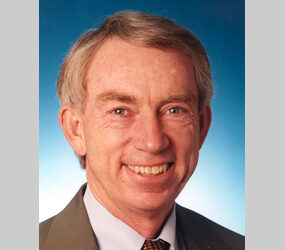 Archbishop Edwin F. O’Brien and the board of trustees of Catholic Charities have named William J. McCarthy Jr. to succeed Harold A. Smith as executive director of the Baltimore-based outreach agency.

McCarthy will join Catholic Charities Aug. 1, and Smith will remain on staff full time to assist with the transition through the end of the year, before retiring after 33 years as executive director.

“I can’t think of a more compelling mission than leading Catholic Charities,” McCarthy said. “As a Catholic, leading this organization gives me an increased sense of living each day with purpose and making a difference.”

“The combination of Bill McCarthy’s executive experience in the Baltimore area, as well as his deep personal commitment to the church’s mission of serving the neediest among us, made him an ideal choice,” Archbishop O’Brien said.

The archbishop said McCarthy’s arrival “evokes mixed emotions because it signals the end of Hal Smith’s tenure as executive director.”

Archbishop O’Brien said he has been struck by the scope of Catholic Charities’ reach in every corner of the archdiocese and by the “well-earned reputation it has gained locally and nationally as a model charitable outreach system.”

“While Hal’s vision and compassion will be greatly missed as he enjoys a well-deserved retirement,” Archbishop O’Brien said, “his legacy will likely continue to be felt by those who turn to our church for compassion and help for many years to come.”

McCarthy acknowledged he is taking over an agency that is feeling pressure from the struggling economy.

“We’re at a time when the needs and demands for the services we offer are at an ever-increasing, all-time high,” McCarthy said. “We’re also at a time when government funding for some of our programs is certainly at risk or has been reduced.”

McCarthy said it will be his responsibility to raise awareness about the mission of Catholic Charities and advocate for the people who are served by the agency.

The incoming leader said he is impressed that 10,000 volunteers and 20,000 donors support the work of Catholic Charities’ programs. He hopes to increase those numbers.

In his first six months, McCarthy said he plans to meet with his agency’s division leaders, visit the programs and reach out to volunteers and donors.

In his more than three decades of service, Smith oversaw significant growth at Catholic Charities. When he started, the agency employed 250 people and had a budget of just $7 million.

“I’ve really tried to rely on listening to the Spirit and make moves for the agency that I thought were in the best interest of the agency,” Smith said, crediting a talented staff and board for much of Catholic Charities’ success.

The 67-year-old parishioner of St. Ignatius in Baltimore said he’s not sure what he will do in retirement, but he is looking forward to volunteering in Catholic Charities’ programs, improving his golf game and enjoying photography.

McCarthy is a graduate of Loyola Blakefield in Towson, Seton Hall University and the University of Baltimore. He is vice chair of the board of St. Joseph Medical Center in Towson and chair of its foundation board, a trustee and chair of the capital campaign for Maryvale Preparatory School in Brooklandville, and a board member of the Greater Baltimore Committee, Downtown Partnership, the Maryland Zoo, the Maryland Public Television Foundation and the Association of Baltimore Area Grantmakers.

“He possesses a management style that emphasizes teamwork and collaboration,” said Clinton R. Daly, president of Catholic Charities’ board of trustees. “He is experienced in managing large, complex organizations. He understands the necessity of disciplined financial planning and management – a valuable skill during a time when the need for Catholic Charities’ services is growing, yet funding resources are constrained.”