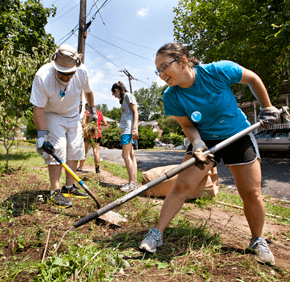 “Solidarity means you are going to meet people who are in a different walk of life,” Father Muth said. “You are willing to walk with them. You don’t give them answers or solutions.”

Father Muth preached to 94 high school-aged youths from parishes in who were in Baltimore July 8-14 with Young Neighbors in Solidarity, a Washington State-based Center for Ministry Development’s pilot program, in partnership with Catholic Relief Services.

The venture focused on poverty, homelessness and hunger.

Worshiping at St. Matthew, a multicultural parish with parishioners from 45 countries, “gives them (the youths) a chance to see a different expression of faith in the Catholic community,” Father Muth said in an interview with the Catholic Review. “They get a taste of the worldwide Catholic Church.”

During the week-long mission trip, the youths volunteered for three days at 15 different sites throughout the Archdiocese of Baltimore, toured the headquarters of Baltimore-based Catholic Relief Services and went to Washington, D.C., to meet with their respective legislators.

One service location was The Franciscan Center, where youths served hot meals to hundreds of people.

The center on W. 23rd Street offers clothing, social services and a hot meal to upwards of 500 people five days each week, said Amy Bachman, the center’s volunteer coordinator. Of those served, about 70 percent are homeless and 20 to 30 percent are the working poor.

Kayla DiBiasie of Sturbridge, Mass., who volunteered at The Franciscan Center, said she used to blame the homeless for their plight. Now, in her second year participating in the program, she has a different opinion.

“After getting to know them (the homeless), they’re real people,” said DiBiasie, 17. “They’re looking for someone to help them.”

DiBiasie said “it’s good to help other people in other countries, but there’s so much you can do in the U.S.”

Bridget Shreve, another Franciscan Center volunteer from Sturbridge, Mass., said she was floored when she saw people bow their heads to pray before eating.

“They have hope for their future,” said Shreve, 17.

Michael O’Connor of Ware, Mass., who also volunteered at The Franciscan Center, said that for him, the week was about “reaching down and helping other people, trying to be the hands and feet of Jesus.”

“I’m not only helping these people,” said Michael, 15, “they’re helping my faith as well.”

The youths – and their adult chaperones – slept on air mattresses in classrooms at The Seton Keough High School in Baltimore.

This was the second summer youth volunteers lodged at the school, said Angela Calamari, Seton Keough’s principal. The school received a $2,000 stipend for the use of the building, money Calamari said will be reinvested in the school.

Each youth fundraised $375 to attend the program.

Ted Miles, relationship manager for youth and religious education for Catholic Relief Services and the director of the Baltimore pilot program, said “we believe young people want to know how to have a meaningful impact on the world.”

“We do this because it is the mandate of the Gospel,” Miles said. “It’s the example of Jesus Christ. Where we will see him is in the face of the poor and the vulnerable.”