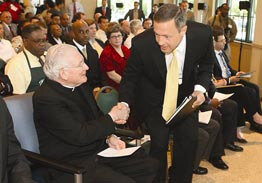 As a bagpiper played “Amazing Grace” in the halls of the new Our Daily Bread Employment Center May 24, hundreds of citizens followed the musician like the Pied Piper to tour Baltimore’s first full-service resource center for the poor.

The symbolic jaunt through the $15 million, 52,000-square-foot facility followed a lavish dedication ceremony of the Catholic Charities project which was nine years in the making. In attendance were state and city politicians, leaders of the Archdiocese of Baltimore, volunteers and recipients of the philanthropic programs that will now be housed in the new building.

While dedicating the facility that is expected to feed 700 of the city’s homeless and poor daily, Catholic Charities Executive Director Harold A. Smith said the new building would allow the most vulnerable citizens to “find dignity, peace and opportunity.”

Gov. Martin J. O’Malley told the crowd the efforts behind the opening of the new Our Daily Bread building, which will serve its first meals June 4, made him proud to be a Catholic and a citizen of Baltimore.

“I think this building says a lot about the heart of the city,” said the governor, a parishioner of St. Francis of Assisi, Baltimore. “Together we do have tremendous power. We still have a lot of work to do and together we are going to do it.”

While blessing the three-story building that resembles an old train station, Cardinal William H. Keeler thanked Gov. O’Malley for his assistance as former mayor of Baltimore in making the new facility a reality.

“This effort began when you came to my house for lunch and we discussed Our Daily Bread,” Cardinal Keeler said to the governor, who was sitting in the front row. “So, for that, I thank you.”
Baltimore City donated the land and provided $2 million to help build the facility. The state of Maryland chipped in $7 million, the federal government gave $450,000, and the rest came from Catholic Charities’ Amazing Grace Capital Fund.

Additionally, case managers will be on hand to help the homeless and poor seek on-site legal aid, health care, substance-abuse treatment, job skills training and employment searches.
Christopher Place graduate Darwin Sketers told the crowd how the 18-month residential program helped him rebuild his life after a long battle with alcohol and drug abuse had left him homeless, destitute and estranged from his family.

“This place ended up being the light at the end of a tunnel for me,” Mr. Sketers said. “I’m proud to say that I now have three years and four months of sobriety. I’m now employed as a mortgage banker. I’ve made more money since coming to Christopher Place than ever in my life, and I’m reunited with my wife and son.”

By offering the homeless services required to become self-sufficient in the same place where they obtain free meals, Catholic Charities is providing a passageway to a richer life and society, Gov. O’Malley said. “We all share the same needs – for homes, jobs and meals.”

In its quarter-century in existence, Our Daily Bread has served more than 5 million meals from the hands of more than 100,000 volunteers, Mr. Smith said.

Pope Benedict XVI has been invited to visit the new Our Daily Bread building if he visits the United Nations in New York in the fall, Cardinal Keeler said.

“I want him to see the facility and see first-hand the impact it has on so many lives,” he said.
Despite the positive reaction, a small group of protesters who were handing out flyers to ceremony attendees were opposed to the new building’s location on the 700 block of Fallsway, a property adjacent to a strip club, correctional facilities and is separated from downtown by the Jones Falls Expressway.

“It’s an insult to move Our Daily Bread from next to the communion table of the basilica to a building that is next to the executioner’s table of death row,” said Gary Ashbeck, a parishioner of St. Peter Claver, Baltimore, and a resident of Jonah House, a city Catholic Worker communal home for peace activists.

Mr. Ashbeck contended that the poor are being “shuttled out of the business district.”

Supporters of the soup kitchen’s new site countered that My Sister’s Place – a Catholic Charities day shelter for woman and children – will be moved into the former Our Daily Bread building next year once it’s renovated, so the poor will still be served next to the newly restored Basilica of the National Shrine of the Assumption of the Blessed Virgin Mary on Cathedral Street.