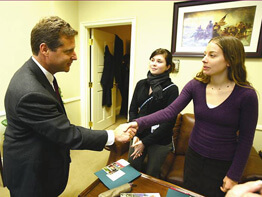 As Del. Steven J. DeBoy Sr. prepared for a busy day representing Baltimore and Howard counties in the Maryland General Assembly, a group of Catholic Charities employees ushered an ex-convict into his office.

The Catholic state delegate and special investigator for the Howard County Police Department sized up 51-year-old Edwin Gregory of Baltimore as he settled into a chair in the modest Annapolis office.

After introductions were made, Mr. Gregory was able to tell the Democratic delegate how the Catholic Charities’ Maryland Re-entry Program helped him re-establish his life after being released from prison by aiding him with housing, drug rehabilitation, employment as a custodian at Immaculate Conception, Baltimore, and encouraging him as he pursues a college education.

Del. DeBoy, a 51-year-old parishioner of St. Augustine, Elkridge, told the Catholic Charities’ employees he was awed by Mr. Gregory’s story, liked the five-year-old program’s low percentage of ex-cons returning to prison, advised them how to seek state funding and said that he would keep the initiative on his “radar screen” when dealing with Maryland’s penal system issues and financial support.

This was the outcome the program’s representatives were hoping for and it provided encouragement to the approximately 50 other Catholic Charities employees and volunteers who descended on the state legislature Jan. 24 to participated in Catholic Charities Day in Annapolis.

It was the first time in four years Catholic Charities has held the event, which is designed to train its employees and volunteers in the art of advocating for their programs and giving state legislators and policy makers a more personal view into the mission of each humanitarian operation.

Del. DeBoy and other Maryland lawmakers have grown accustomed to Catholic Charities stalwarts Lynda Meade and Kathleen Gardiner roaming through the State House corridors and ducking into the offices of policy makers pitching the organization’s host of causes.

Though the efforts of the two advocates from the Catholic Charities office of Social Concerns are appreciated and effective, it’s the stories from people in the trenches that pique the interests of legislators, said Del. John L. Bohanan Jr., D-Md.-29B, St. Mary’s County.

“A lot of people have become cynical that their elected officials are not listening to them, but I believe most of us in Annapolis are paying attention,” Del. Bohanan said.
Program leaders also met with delegates and senators throughout the day to make them aware of the work they do.

“Many of our clients have started to work in Anne Arundel County and want to move out of our transitional housing, but can’t find affordable housing in the area,” Ms. Maloney told the Republican delegate. “There is the same problem with child care. When they have to shell out $150 a week per child for day care, there isn’t much left over for rent or other essentials on a minimum-wage salary.”

Lisa Cole, a former homeless woman and client of Catholic Charities’ My Sisters Place Baltimore day shelter who now volunteers for the program, told Del. Barbara A. Robinson, D-Md.- 40, Baltimore City, and Sen. Rona E. Kramer, D-Md.-14, Montgomery County how that organization got her off of the streets four months ago and into a home.

The St. Bernadine parishioner is considered a success story for My Sisters Place and she was more than happy to help convince the legislators more people like herself can benefit from the program and reduce the city’s homeless population.

“I’m so pleased to volunteer for this program,” Ms. Cole said. “They helped me get housing and helped me with some of my medical problems. I like that I can now help them.”

Gov. Martin O’Malley submitted a $30 billion bare-bones budget in mid-January and a bleak fiscal outlook for the next several years has lawmakers scrambling to cut spending and find new revenue sources to keep future budgets balanced, which is required under state law.

Keeping the fiscal restrains in mind, Ms. Meade told the Catholic Charities leaders they need more than financial support from lawmakers. They also need them to understand why their programs are important to the state.

Del. DeBoy agreed with Maryland Re-Entry Program Director Rada Moss that it was more cost effective to pay initial housing, educational and treatment fees of recent ex-convicts then for them to return to prison and told her he would endorse that philosophy to his colleagues.

“We have 26,700 in our state prisons,” Del. DeBoy said. “It puts a huge strain on our state. Programs like yours that work to keep ex-offenders from going back to prison will save us money in the long run.”