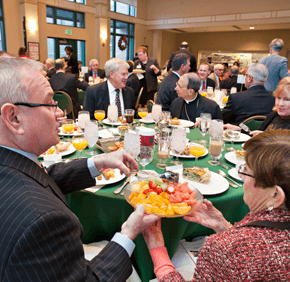 By Maria Wiering
mwiering@CatholicReview.org
Twitter: @ReviewWiering
Catholic Charities of Baltimore has raised a record $3 million for operating expenses this year and expects to meet its goal of $3.3 million by year’s end, the organization announced Dec. 5 at its annual leadership breakfast.
Fundraising from this year’s Leadership Breakfast Campaign topped last year’s record of $2.7 million.
“It is no surprise that an unprecedented number of people are turning to Catholic Charities with a variety of circumstances and complexity of needs. Your financial support of our work is enormously important,” Marc Bunting, chair of the 2012 Leadership Breakfast Campaign, told event attendees.
In its 32nd year, the breakfast drew 134 people, including Archbishop William E. Lori, Catholic Charities board chairman, and local philanthropists to the dining room of Our Daily Bread Employment Center in Baltimore, where Catholic Charities feeds an average of 700 homeless people daily.
Bunting, chief financial officer for Alpine Bagel and Brews, told the Catholic Review that people he asked to donate funds understood that Catholic Charities serves an important role in Maryland.
“The key is letting people hear from someone that’s really been affected by our services and changed their lives in a positive way,” he said.
At this breakfast, that person was Baltimore resident Alvin Davis, who was once among the men and women who eat meals at ODBEC. He turned to Catholic Charities’ Christopher Place Employment Academy to get his life back on track after drugs and a prison sentence left him homeless, he said.
Now in his 50s, Davis is finishing a degree in social work at Coppin State University in Baltimore and plans to pursue a master’s degree in the field.
None of his accomplishments could have been possible without Catholic Charities, he said.
Catholic Charities CEO William McCarthy Jr. highlighted the organization’s 2012 achievements, including the 25th anniversary of Sarah’s House in Fort Meade, which serves homeless families in Anne Arundel County, and the opening of the Green House Residences at Stadium Place, a long-term care facility in Baltimore with a care philosophy unique to Maryland.
This year Catholic Charities also found work for more than 300 people, served more than 370,000 meals and placed nearly 1,000 people in transitional and permanent housing. It also provided intake, casework and emergency services for more than 8,000 people, and provided mental health assessment, counseling and treatment for more than 16,000 children and their families, McCarthy said.
“Even as I refer to our statistics, it is important to remember that Catholic Charities is not in the numbers business,” McCarthy said. “We’re in the business of helping people make meaningful improvements in their lives. Behind every number is a human being who comes to us in crisis or with great need, a person whose inherent dignity demands our love, compassion and respect.”
In his remarks, Archbishop Lori said that “we couldn’t be church in Baltimore” without Catholic Charities’ work, which “spans the length and breadth of human need.”
Kathleen Ryan Lekin, Catholic Charities board president, said the annual breakfast brings people to Catholic Charities’ most visible site, given its location along Interstate 83, but that the organization’s work goes far beyond feeding the lines of people who wait outside the building every day.
Lekin said she volunteers regularly at My Sister’s Place Women’s Center in Baltimore, which serves homeless women and children.
“You can’t come into this organization and not get committed to what we’re doing. You just can’t,” she said.
Copyright © December 5, 2012 CatholicReview.org
PrevNext