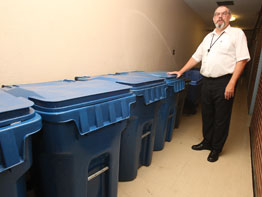 Kermit the Frog once sang “It’s not easy being green.”

The leaders at the Archdiocese of Baltimore’s downtown headquarters beg to differ, however.

Since June, the employees of the Catholic Center have made environmental inroads at the building, increasing their recycling efforts while cutting water and electricity usage. Employees are also encouraged to take public transportation to work, if possible.
God is at the forefront of the environmental movement for Catholic leaders.

“Here at the Catholic Center we want to be leaders in all of this,” Nolan McCoy, director of facilities and real estate properties for the archdiocese, said. “We have to protect the resources we have been entrusted.”

The move toward conserving follows several edicts by Pope Benedict XVI over the years.

“In dialogue with Christians of various churches, we need to commit ourselves to caring for the created world, without squandering its resources, and sharing them in a cooperative way,” he said in 2006.

The United States Catholic Conference of Bishops followed up the pope’s statements in 2007 with their own declarations about environmental consciousness in a document called “Forming Consciences for Faithful Citizenship.”

“Care for the earth is a duty of our faith and a sign of our concern for all people,” the bishops said. “We should strive to live simply to meet the needs of the present without compromising the ability of future generations to meet their own needs. We have a moral obligation to protect the planet on which we live – to respect God’s creation and to ensure a safe and hospitable environment for human beings, especially children at their most vulnerable stages of development.”

George Keitz, the Catholic Center building manager, said there was a sense of positive obligation among employees at a June kickoff party for their “green” efforts.

Each employee has a white or clear paper-only bin at their desk. At the end of each day, employees take their paper to a larger bin stored on each floor. Throughout the week, paper is taken from the building so it can be recycled into further usage.

With the paper efforts, the building has cut trash dumpster collections from four to three times a week in just two months thanks to recycling efforts.

“It’s going really well,” Mr. Keitz said. “A lot of them have embraced the idea of recycling. This isn’t just a feel good kind of thing. The Vatican has said we have a moral obligation to this earth. The Catholic Center has taken that message seriously.”

The building also recycles aluminum cans and plastic through collections.

In order to reduce water usage, Mr. Keitz has spearheaded the effort to have building bathrooms feature “touch-less” sink fixtures to sense when water needs to be turned on and off. The building is also moving to lower wattage bulbs in some rooms and exploring installing sensors in rooms to keep electricity off when rooms are not in usage.

Mr. Keitz said people inside the Catholic Center are committed to changing their lives for the betterment of the world.