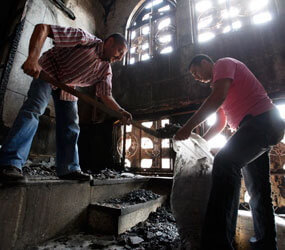 LONDON – Egyptian police must act more quickly against Muslim rioters, a Catholic bishop said after 12 people were killed and two churches burned in a night of violence.

Bishop Antonios Aziz Mina of Giza said Egypt would descend into anarchy if such outbreaks of violence were allowed to go unpunished.

“The police need to say clearly to those who have done this: ‘You cannot do this. It is not allowed,’ ” he said in a May 9 telephone interview with the British branch of Aid to the Church in Need, a Catholic charity helping persecuted Christians.

“Without action from the police and the army, it will be chaos, complete anarchy,” the bishop said.

“The army will not stand up against the people who do this sort of thing,” he said. “They want to stay neutral. The police appear, but very slowly. They are frightened. They have not been strong enough.”

The bishop added: “We cannot make peace and reconciliation without first bringing people to justice. Otherwise, the reconciliation is just theater, and the problems will remain.”

Bishop Mina’s remarks followed violence in Cairo May 7 triggered by claims that a Christian woman who wanted to convert to Islam was being held against her will in the Orthodox Church of St. Mina in the Cairo suburb of Imbaba.

Four imams were allowed into the church but could find no one held there.

However, a mob of about 500 Salafi Muslims massed outside the church before attacking it at about 5 p.m. The Salafis are a Muslim sect dedicated to the spread of what they believe is traditional, Orthodox Islam, including in the political life of predominantly Muslim countries.

At about 5:30 p.m., the mob began shooting at Christians, and beginning at 7 p.m., firebombs were thrown at their homes, shops and cars. The mob also attacked the nearby Orthodox Church of the Virgin Mary, according to reports. Christians responded by hurling glass and stones at their assailants.

The army did not take control of the situation until after 10 p.m., when it sealed off access roads to Christian areas and churches.

One Orthodox priest said that about six police officers arrived earlier but fled the scene when they saw that the protesters were firing live ammunition.

Seven Christians and five Muslims were reported killed in the violence, and more than 200 others – the vast majority of them Christians – were injured.

Sectarian violence, the bishop said, was becoming “too much for Christians to bear.”

The Egyptian army has said that 190 people were arrested and will face military trials. The military is also reported to have increased security around churches in Cairo.

Egypt’s Christian community has felt increasingly vulnerable following a spate of attacks by Muslims, among the worst of which was the New Year’s Day bombing of an Orthodox church in Alexandria. About 20 people were killed in that attack and 70 others injured.

Cardinal Antonios Naguib, Coptic Catholic patriarch of Alexandria, told Aid to the Church in Need that Christians were in the midst of a “a very serious situation.”

Catholic Bishop Youhannes Zakaria of Luxor said, however, that the Christians are refusing to be intimidated.

“Last weekend, I was celebrating Masses in our villages and I expected that they would be afraid and that it would be necessary to encourage the faithful,” he told Aid to the Church in Need in a May 9 telephone interview.

“But it was they who encouraged me,” he said. “It is not our character to give up. Next day, we pick up the pieces and start again.

“People are determined to bear witness to Christ in the lands where he lived,” he added.

After the attacks, Fides, the Vatican missionary news agency, quoted Comboni Father Luciano Verdoscia, who works in Cairo, as saying: “The neighborhood of Imbaba is a poor area, and fanaticism flourishes where poverty and ignorance reign. The Salafis are a group that is not the majority, but make themselves heard, even with violent actions. According to some commentators, these groups are controlled by the old (Egyptian) regime, who want to make others believe, ‘Look what is happening without us.’“

About 90 percent of Egypt’s 82 million population are Muslims, with Orthodox representing about 9 percent of the population. Other Christian denominations, including Catholics, make up the remaining 1 percent.