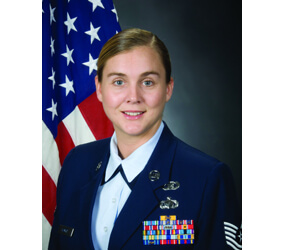 WASHINGTON – When Tech. Sgt. Jennifer Laufer, chaplain assistant with the 42nd Air Base Wing, was named one of 12 outstanding airmen of the year by the Air Force Association, she said the honor was not only personal, but a tribute to the work of military chaplains.

Laufer said she is the first female chaplain’s assistant to receive this honor.

The 35-year-old mother of two is currently stationed at Maxwell Air Force Base in Montgomery, Ala., along with her husband, Master Sgt. Rob Laufer. The family attends nearby St. Joseph’s Parish in Prattville. Where Laufer and her husband are extraordinary ministers of holy Communion and their children are altar servers.

Laufer was honored during a Sept. 14 ceremony during the Air Force Association conference at the National Harbor in Oxon Hill, Md., just outside Washington. The honorees, selected for leadership, job performance, community involvement and personal achievements, represent more than 400,000 enlisted members of the Air Force.

Chief Master Sgt. Of the Air Force James Roy said the 12 men and women “demonstrate the very best of enlisted airmen.” Praising them for their accomplishments, he said they have “kept the streets of Baghdad safe, captured terrorists, built airfields in Afghanistan, reported threats to coalition convoys.” They also “evacuated soldiers from a firefight, reinvigorated the nuclear inspection processes, spiritually cared for wounded service members, ensured combat crews were ready to fight, and built better medical processes for our patients.”

Laufer fits in that category of spiritually caring for wounded patients. When she was recently deployed to the Kirkuk Air Base in Iraq she had the role of combat spiritual leader working with the medical staff and injured service members.

“Anytime someone was wounded, we were there to meet their spiritual needs,” she told Catholic News Service Sept. 16.

She said the most rewarding aspect of her work in Iraq was simply being with the servicemen and women and supporting them. The hardest part was being away from home.

“If I could bring my husband and the kids, I would,” she said, noting that she wishes her 16-year-old son and 11-year-old daughter could see the positive work the U.S. military is doing in Iraq that doesn’t get covered by the media.

For example, she said military personnel have delivered basic school supplies to local schools where the students, who had next to nothing, acted as happy as kids in the United States would “if they had just been given PlayStations.”

During her four-month deployment in Kirkuk, Laufer also led the first joint service visit to a nearby mosque and organized means for locals to attend prayer services there.

She said her own faith has grown stronger since the moment she first learned of her deployment.

Before she left her home in Alabama for Iraq, she said her parish priest, Father Philip McKenna, blessed her and the family home.

Ultimately, Laufer said the deployment brought her closer to her family.

“The little things I got so frustrated about before I went were no big deal when I got home,” she added.

She said the main part of her work, both at the Alabama base and while deployed, is listening.

“In the military, we have 100 percent confidentiality,” she said, noting that even when people are initially hesitant, they often want to talk to someone. “As a chaplain’s assistant, I kind of break that ice,” she said. She encourages people to talk about what’s on their minds so they can resume focusing on their duties.

Capt. David McGuire, a military chaplain who worked with Laufer in Iraq, told the Air Force News that Laufer demonstrated a great deal of “courage, dedication and professionalism.”

He said the first time they were called to the hospital for incoming wounded, there were “a lot of unknowns running through their minds as the helicopters were preparing to land.”

“Thoughts and concerns went back and forth along with prayer for guidance and strength,” he said.

Although Laufer similarly didn’t know what to expect, he said, she immediately performed her duties with great compassion and gentleness.