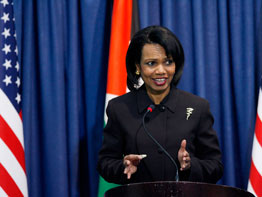 JERUSALEM – A Catholic political analyst said the current U.S. administration is part of the problem in the Middle East, not the solution.

“Unfortunately (President George W.) Bush’s administration is a failure in the … Middle East, starting in Afghanistan, stretching through to Iraq and moving on to Lebanon and Israel-Palestine,” said Wadie Abunasser, an Arab and director of the International Center for Consultations in Haifa, Israel. “There is a lack of good American understanding of the reality and mentality of the region.”

Abunasser added that the situation continues to deteriorate because of a lack of sufficient international intervention, specifically by the United States.

Despite the numerous visits to the region by members of the U.S. administration, including U.S. Secretary of State Condoleezza Rice, who arrived in Ramallah, West Bank, March 4, Arabs in general and Palestinians in particular do not feel they have benefited, he said.

People were not optimistic about Rice’s visit, Abunasser added.

“Palestinians feel the purpose of the peace process is to bring them to their knees,” he said.

Although on-again, off-again talks were resumed following Bush’s visit in January, people have not felt any concrete changes on the ground, he said.

In Ramallah, Rice said that she believed a peace deal between Israel and the Palestinians was still possible this year and urged the two sides to resume talks.

Abunasser said the recent escalation of violence along the Gaza border between Palestinian militants and the Israeli military is a clear indication of the complete lack of their understanding of each other.

“Israel has been running after Hamas for 20 years, and Hamas is growing,” he said. “I am not saying that Hamas is good, but these policies are not effective, so they (Israelis) have to start looking at other options.”

Palestinians say at least 10 people, including civilians and children, were killed by Israel March 2, bringing the number of dead in six days to more than 100. Israel says most of those killed were armed militants.

Israeli civilians in the cities of Ashkelon and Netivot were put on alert after Palestinian rockets reached their cities. More than 150 rockets were launched into Israel in five days beginning Feb. 27, said Israeli sources. Two Israeli soldiers were killed during the military operation in Gaza, and one Israeli was killed by a Palestinian missile, the first fatality from missile fire in nine months. Dozens of Israelis have been injured by the missiles.

Ramzi Zananiri, executive director of the Near East Council of Churches in Jerusalem, said the constant tallying of numbers of wounded and dead ignored the fact that behind those numbers were real people suffering on both sides of the border.

His real concern, he said, is the growing radicalization in Gaza.

“There is ongoing suffering here and a growing desperation and hopelessness. There is more radicalization, and this is not a healthy environment to look toward the vision of a two-state solution. We are being driven far from it,” said Zananiri. “What is happening in Gaza is beyond imagination. Instead of moving forward we are really moving backward into the circle of violence. It is very indicative of a dark future.”

People are “being driven to the edge” by the continuing Israeli-imposed blockade, closures and roadblocks in Gaza and the West Bank, he said. Israel says these measures are necessary to protect its citizens from terrorist attacks.

Currently most Israeli military action in Gaza is from artillery and airstrikes against areas from which missiles have been fired. The Ha’aretz daily newspaper reported plans for ground operations.

In late January Israel instituted an embargo of supplies for Gaza in protest of the missile attacks, with limited amounts of fuel, medicine and food entering the territory. However, in late February and early March, supplies continued to move through the border crossings in controlled amounts, and Israel announced March 4 that it had allowed 62 trucks of food and medicine into Gaza.