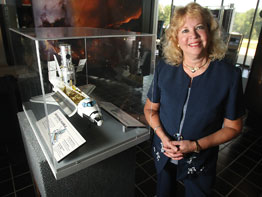 Kathleen Beres recalls all too well holding her face on the morning of Jan. 28, 1986, as the spaceship Challenger exploded 18 miles up in the cold blue sky, spitting unwanted fireworks above a crowd witnessing the tragedy.

The Catholic High School of Baltimore alumna watched from the outdoors VIP area, near where the rocket had launched 73 seconds earlier.

“People were still cheering,” she sadly remembered, “while I knew it was exploding.”

Her colleague and fellow teacher Christa McAuliffe was on board, perishing with six others. Ms. Beres maintained a perpetual state of sorrow as she attended all seven funerals.

As astronaut candidates, Ms. McAuliffe and Ms. Beres trained together with eight other teachers selected for NASA’s Teachers in Space program in 1984.

“It was such a fun time,” said Ms. Beres of the two years the candidates were featured in the media as they were assigned to flight centers around the states.

She aimed, she said, to communicate “the value of space to students. The classroom goes beyond its four walls – the universe is our classroom.”

In NASA training exercises, the veteran of 15 years of teaching in public schools experienced weightlessness and was tested in high altitude and hyperbaric chambers.

Since the days of sporting a high school olive green jumper and tan blouse, Ms. Beres’ list of accomplishments and adventures is extensive. She’s mountain-climbed on every continent, crossed the Atlantic Ocean in a 31-foot sailboat, and raced a sailboat from Annapolis to Bermuda.

When fellow teachers shared their summer destinations, Ms. Beres’ reply was never Ocean City. Instead, she traveled the Antarctic, Greenland, Kenya, New Zealand, Russia and Central America. Field research work shuffled her to places like Iceland, Patagonia, the Galapagos Islands and Fiji. She has kayaked icy waters accompanied by whales and icebergs.

“I am adventurous,” she said with a bright smile, often using her hands excitedly to speak. “As a kid, the swings didn’t go high enough and the slides didn’t go fast enough. I love nature and the beauty of the world.”

At the NASA Goddard Space Flight Center Visitor Center in Greenbelt, where Ms. Beres chatted with The Catholic Review, an enormous tent was being erected for a 25th anniversary reception to honor Dr. Sally K. Ride, the first American female in space in 1983. The event was to recognize the contributions of women to space, science and engineering.

Ms. Beres was a scheduled speaker to a group of 35 young female students on the joys and successes of nontraditional careers for women.

Catholic school was a constant throughout her life, first at St. Clement Mary Hofbauer, Rosedale, near her childhood home, then Catholic High and the College of Notre Dame of Maryland. She then earned a master’s in science from The Johns Hopkins University.

Ms. Beres was accepted into the space program in 1984, after submitting a 25-page application. Selected as a finalist in a national pool that included more than 11,000 teachers, she traveled to Washington, D.C. and Houston for medical tests, briefings and interviews.

Her Catholic education was one for life.

“It prepares you,” she said. “It teaches self-reliance, responsibility for one’s actions, respect and judgment. You get a sense of what’s important and what isn’t. It’s value-centered, coupled with an understanding of faith.”

Retiring from the aerospace industry last spring, Ms. Beres is now an aerospace consultant. Working from her home in Mitchellville, she stays involved with Catholic High as a speaker, sometimes during commencements. After a 2006 reunion, she meets monthly with former classmates.

She has narrated a Catholic High ad on WBAL radio, and encouraged girls to study match and science.

Wanting to fly in space is risky, but it’s something the blond-haired Ms. Beres has desired since she was a child.

“Every day we live is risk management,” she said, “so we learn from failures and celebrate successes. Catholic High had an enormous impact on my life and helped make me the woman that I’ve become.”