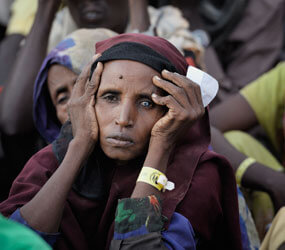 LUSAKA, Zambia – Catholic agencies are reported to be among the leading organizations providing humanitarian aid to the drought- and famine-ravaged Horn of Africa.

The Association of Member Episcopal Conferences in Eastern Africa reports that Jesuit Refugee Service, Catholic Relief Services, Caritas Ethiopia and Caritas Kenya have helped thousands of refugees in northern Kenya and internally displaced people in Somalia since the water crisis hit in November.

Despite the efforts, Father Ndaga expressed concern that the drought’s severity and insufficient funding are overwhelming the agencies’ ability to make much progress against what the U.N.’s Office for the Coordination of Humanitarian Affairs calls the region’s worst food crisis in 60 years.

About 12 million people across Ethiopia, Somalia, and Kenya are in dire need of food, clean water and basic sanitation, while about 3.7 million people are at risk of starvation in southern Somalia, the worst hit area.

Father Ndaga said teams from Catholic organizations are on the ground, particularly in eastern Kenya, home to the sprawling camp at Dadaab that houses about 390,000 refugees and sees 1,300 people arrive each day from drought-stricken Somalia. The agencies also are working in collaboration with international aid organizations such as the World Food Program.

The U.N. officially has declared a famine in parts of Somalia, the first such declaration in two decades. The U.N. added three regions in Somalia to its famine declaration Aug. 3, including the internally displaced communities in Mogadishu, the Somali capital.

The same areas also are plagued by a lack of security because of a week central government in Somalia and the presence of various political factions which control parts of the country. The instability and resulting violence severely limits the delivery of humanitarian assistance.

CRS Africa Team Leader Brian Gleeson in July appealed for additional international assistance, saying the “spring rains earlier this year were erratic and weak and as a result farmers have experienced horrible harvests and pastoralists are seeing their livestock dying off.”

“This drought comes as prices for staple foods are increasing, in some cases more than doubling in the past year,” Gleeson said, adding that many people already spend a huge percentage of their income on food.

“A rise in prices pushes them over the edge,” he said.

Meanwhile, a consortium of Somali nongovernment organizations urged the international community to act swiftly to avert a deepening of the country’s crisis. Representing 78 agencies, the consortium said that that the situation is not expected to improve until January 2012.

Mary Robinson, honorary president of Oxfam International who recently visited the Horn of Africa, called for a radical shake-up of the international aid system in order to break the cycle that leaves the poorest and most vulnerable people limping from one crisis to the next.