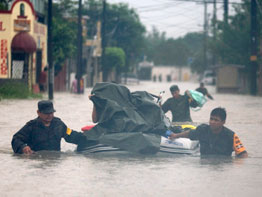 WASHINGTON – Food and water were among the primary needs Catholic aid agencies were trying to meet as thousands of households remained without power and some remained under water July 25 in the wake of Hurricane Dolly.

Sister Norma Pimentel, executive director of Catholic Social Services in the Brownsville Diocese, said her agency had helped more than 1,000 families who had been forced from their homes during the first 48 hours after the storm hit.

“We are mobilizing the staff and volunteers to help people who don’t have electricity and who have been without power for quite awhile,” Sister Norma, a Missionary Sister of Jesus, told Catholic News Service as she took a short break from coordinating aid efforts. “We’re getting food and water to the people.”

“Parishes are directing their people to us so we can start to do some case management and do long-term recovery,” she said.

Dolly lashed the Brownsville Diocese, which encompasses Cameron, Willacy, Hidalgo and Starr counties in southernmost Texas, with 100-mph winds and up to 20 inches of rain. The center of the storm made landfall about 35 miles north of the U.S.-Mexico border. Communities in the northern part of the diocese in Willacy and northern Hidalgo counties bore the brunt of the storm as the eye passed over the region.

Although flooding was widespread throughout the region, waters receded in most areas quickly.

Flooding continued July 25 to affect some sections of the diocese, especially in Hidalgo County, Sister Norma said. U.S. Route 83, a major expressway that parallels the Rio Grande, remained closed in sections of the county making the distribution of supplies more difficult.

Catholic Social Services had established three distribution centers – in San Juan in Hildalgo County, Brownsville in Cameron County and in Willacy County. Supplies were donated by Wal-Mart and Save-A-Lot, a grocery store chain.

Sister Norma was planning to lead a contingent of Catholic officials on an aerial tour of the entire diocese July 26. The group was to include Bishop Raymundo J. Pena of Brownsville and Randi Fertitta, director of disaster response for Catholic Charities of Southeast Texas, which is based in Beaumont.

Ursuline Sister Miriam Fidelis of Cleveland, who leads a ministry serving poor migrant workers in Brownsville and Matamoros in the Mexican state of Tamaulipas said most people seemed to have dealt with the storm fairly well.

“People down here are a lot like in El Salvador,” she told Catholic News Service July 24, a day after returning from World Youth Day 2008 in Sydney, Australia. “They just take it, go with the flow and thank God they survived. They know it could be worse. People are doing OK.”