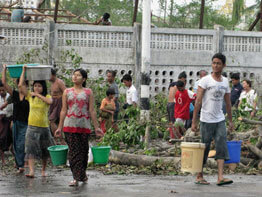 WASHINGTON – Catholic aid agencies were assessing the humanitarian situation in Myanmar after a cyclone hit the Southeast Asian country and killed thousands.

At the same time, Pope Benedict XVI expressed deep sadness and “heartfelt sympathy” after hearing news of “the tragic aftermath” of Cyclone Nargis which swept over southern Myanmar May 3. Initial reports put the death toll at around 350, but that number soon jumped to 4,000. Foreign Minister Nyan Win said May 5 that 10,000 people could have been killed by the cyclone’s heavy rains and winds of up to 120 mph.

The cyclone damaged at least three major cities, including Yangon, the capital of Myanmar and its largest city.

Caritas Internationalis, a confederation of 162 Catholic relief, development and social service organizations, said in a statement May 5 that it was gathering information in Myanmar and was concerned about the humanitarian crisis.

“There is an urgent need” for aid workers to get “to the affected areas so that we can assess the damage, start to provide food, shelter, clean water and medical assistance,” said Dolores Halpin-Bachmann, Caritas emergency response tem leader, in the statement. “Myanmar is a poor country and will most likely need international help to respond to a disaster on this scale.”

Ms. Halpin-Bachmann added that Caritas “only been receiving sketchy reports but they’re enough to make us concerned about the humanitarian situation.”

Eleonore Fournier-Tombs, communications officer for the Canadian Catholic aid organization Development and Peace, told Catholic News Service May 5 that it was evaluating the situation to create an appropriate action plan.

In a telegram sent on behalf of the pope by the Vatican secretary of state, Cardinal Tarcisio Bertone, Pope Benedict said he was praying for the victims and their families and called for “divine strength and comfort upon the homeless and all who are suffering.”

A copy of the telegram, addressed to Archbishop Paul Zinghtung Grawng of Mandalay, president of the Catholic Bishops’ Conference of Myanmar, was released by the Vatican May 6.

The pope said he was “confident that the international community will respond with generous and effective relief to the needs” of those hit by the cyclone.

1 percent of the population of junta-ruled Myanmar is Catholic. A great majority of its citizens are Buddhist.