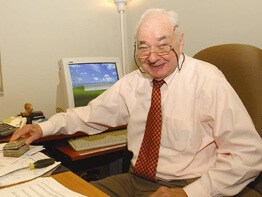 W. King Pound, a parishioner of St. William of York in Baltimore who obtained national ads for Catholic newspapers and magazines during most of his 57-year career in advertising, died May 8 at his home in Baltimore. He was 82.

A memorial service was to take place May 15 at Loudon Park cemetery in Baltimore, with a Mass and interment to follow July 3 at Arlington National Cemetery in Virginia for the decorated veteran of World War II.

Mr. Pound was instrumental in founding the Catholic Markets Newspapers Association, organized to obtain national advertising for all of the Catholic newspapers in the country. He resigned from the Standard in 1983 to found King Pound Advertising Inc., his own retail advertising agency, and later incorporated KPA Media Network to succeed the association, by then defunct.

After the sale, he and his longtime associate, Sally Rheineck, continued to work for Advertising Media Plus at The Catholic Review’s headquarters in Baltimore.

During World War II, Mr. Pound was a gunner in an M5 light tank attached to the 4th Armored Division, part of General George S. Patton’s Third Army. After spending three months in the U.S. Army hospital at Cherbourg for a minor flesh wound that had become badly infected, Mr. Pound fought in the Battle of the Bulge from Dec. 16, 1944-Jan. 28, 1945. During one of the fights, Mr. Pound’s tank was hit by an enemy shell. He rescued the tank’s trapped driver and carried the injured man to safety on his back. The action earned Mr. Pound the Bronze Star.

In a 2004 interview with The Catholic Review, Mr. Pound said young men of his generation were eager to defend their country.

“We were all straining at the bit to get into action,” said the graduate of Mount St. Joseph High School in Baltimore. “You had to be young to like this. I just hoped my luck would hold out.”

“He served his country with great distinction,” said Mr. Medinger. “His service to the Catholic press, however, made him a saint.”

When Mr. Pound started his national advertising agency on behalf of Catholic newspapers, he did so at great personal risk, according to Mr. Medinger.

“That noble service to provide both representation and funding for Catholic newspapers has had an untold impact that’s beyond the millions he raised in advertising revenue,” Mr. Medinger said.

Mr. Medinger recalled visiting his friend at Mr. Pound’s bedside a few days before his death.
“I promised him that I would take care of his legacy and even though he couldn’t speak, he gave my hand a firm shake and that’s a handshake I will never forget and a promise I intend to keep,” Mr. Medinger said.

Mr. Pound is survived by his wife of 60 years, the former Patricia McDonald; two sons and two daughters and their spouses; 10 grandchildren; two great-grandchildren; and a sister.
Catholic News Service contributed to this article.