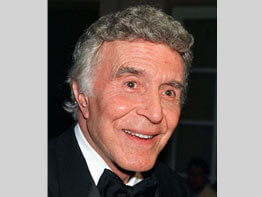 LOS ANGELES – Catholic actor Ricardo Montalban, whose work in television and movies also included several Catholic projects, died Jan. 14 at age 88 at his home in Los Angeles. He had been suffering from congestive heart failure.

A family representative told the news media his funeral would be private.

The Mexican-born Montalban – best known for his role as Mr. Roarke on TV’s “Fantasy Island,” which ran for six seasons, and for his commercials for the Chrysler Cordoba with its “soft Corinthian leather” and “crushed velour” – always credited his faith for helping him in Hollywood.

Mr. Montalban won several awards for his contributions to the entertainment industry and the Catholic faith.

Offstage, Mr. Montalban founded an organization called Nosotros in 1970 to help improve the image of Spanish-speaking people and to increase employment for Hispanics on both sides of the camera. Mr. Montalban was made a Knight Commander of St. Gregory the Great in 1998 by Pope John Paul II.

He won the lifetime achievement award in 2003 from Catholics in Media Associates, saying it was “my tenacity and faith that has seen me through my many years in entertainment.”

The year before, Mr. Montalban was given the first Spirit of Angelus Award by Family Theater Productions “for a body of work of surpassing quality complemented by a faith lived with integrity and generosity.”

At the ceremony, Mr. Montalban said his Catholic faith had been and was the most important thing in his life, followed closely by his marriage to his wife of 50 years, his family and his two countries – Mexico and the United States. He also encouraged young filmmakers at the awards ceremony to find freedom through discipline and doing what is right.

“Ricardo was a longtime friend and supporter of Family Theater Productions and a gracious and generous man who shared his gifts and talents in many ways,” said Holy Cross Father Willy Raymond, Family Theater’s national director.

“He has supported our work … for more than 60 years through our radio programs and our Angelus Student Film Festival,” he said in a Jan. 14 statement.

Mr. Montalban got involved with Family Theater shortly after he met its founder, Holy Cross Father Patrick Peyton. Mr. Montalban won the Personal Achievement Award in 2000 from the Gabriel Awards’ sponsors, Unda-USA, now known as Signis. The award is presented each year to an individual whose career has provided outstanding leadership to the broadcast and entertainment community in furthering the Gabriel Awards’ ideals of uplifting and supporting the human spirit and dignity.

In 1998, Mr. Montalban was among those who received papal honors at a Mass sponsored by the Archdiocese of Los Angeles. He used a walker during the Mass and visibly suffered from an old spinal-cord operation. But despite his pain he beamed at reporters after the Mass, saying, “I’m in seventh heaven.”

A group of Catholic media industry leaders feted Mr. Montalban in 1988 with its Crux Mea Stella (The Cross Is My Star) award.

Even before he achieved popularity in Hollywood, Mr. Montalban was a working actor in New York. The book “The Story of St. Malachy’s – The Actors’ Chapel: A Church on Broadway” included Mr. Montalban among the many high-profile Catholics who attended the parish’s 4 a.m. Sunday Mass after all of Manhattan’s nightspots had closed.

Some of the Catholic-oriented productions in which Mr. Montalban participated included “Voz Latina: Radio for the Latin Explosion,” produced by Family Theater in the mid-2000s; the 1988 Catholic Communication Campaign program “Beyond the Dream: Immigrants in America,” which originally aired on NBC; and the 2001 CCC-funded documentary “The Face: Jesus in Art,” which is a perennial on PBS stations nationwide. He also hosted the docudrama “Fatima,” which presented a history of events in Portugal at the time of the Marian apparitions at Fatima.

Mr. Montalban was married to Georgiana Young, sister of actress Loretta Young, from 1944 until her death in 2007. He is survived by their four children and six grandchildren.