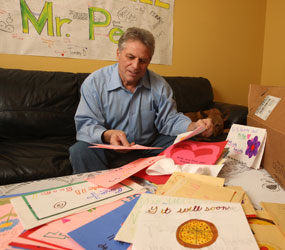 OVERLEA – George Bailey has nothing on Pep Perella.

Just as the everyman hero of the film classic “It’s a Wonderful Life” discovered all the lives he had touched, Thomas “Pep” Perrella is getting a gauge on just how many men, women and children are behind him.

Perrella was recently diagnosed with stage IV cancer of the pancreas and liver. In the ensuing weeks, the thousands of Catholic schoolchildren he has fed through his namesake food service, Pepper’s Catering Inc, have created a ripple effect that has made him one of just 80 patients in a national clinical trial.

It’s amazing what an upbeat spirit and a little chicken parmigiana can do.

“I feel so lucky, that I’ve been able to make a living feeding little kids,” Perrella said. “I am blessed. This has given me an opportunity to renew bonds. … I have so many people to thank.”

Archbishop Curley High School, his prep alma mater, will serve as the meeting spot Feb. 20 (see below) for a benefit that will create a fund for his daughters Gabrielle and Ivy, a senior and a freshman, respectively, at Mercy High School, but his ties to Catholic institutions don’t stop there.

In addition to overseeing the school kitchens at Curley, The Catholic High School and Immaculate Conception School in Towson, Perrella is the cafeteria manager for the School of the Cathedral of Mary Our Queen.

“It’s not just lunch, Pep is there all the time for us,” said School Sister of Notre Dame Josephann Wagoner, the school’s principal. “We’re keeping him in our prayers, supporting him in every possible way. Some of the cards our children made for him are unique.

“Some of the kids said that they’re not going to have chicken nuggets again until he makes them.”
The living room in Perrella’s home is decorated with posters and cards from students. His health is among the intentions at 5 p.m. Mass Feb. 19 at the Cathedral, and those prayers have been backed by rigorous advocacy.

According to Perrella, current and past Cathedral School parents, such as Laura Driskill and Carol Long, “hit the phones for me, calling every hospital in Baltimore, to see what’s best for me.”

Dr. Christopher L. Wolfgang, the father of a Cathedral School fifth-grader, is the director of pancreatic surgery at The Johns Hopkins Hospital in Baltimore. He encouraged Perrella to inquire about a clinical trial being conducted by Dr. Dan A. Laheru, a medical oncologist.

Perrella was to begin the trial Feb. 15.

“The kids adore him,” Wolfgang said.

“He’s courageous to be participating in this clinical trial,” said Laheru, an authority on the use of vaccines to combat pancreatic cancer. “We’re hampered, in that we don’t have all of the knowledge of the biology of pancreatic cancer. Hopkins is one of three sites in the nation for this trial, and Pep is among the first 10 patients in the country, one of the real pioneers in this work.”

Perrella, 58, is accustomed to being a trailblazer.

He literally put Curley on the athletic map, scoring the decisive goal in 1968, when the soccer team won the Friars’ first Maryland Scholastic Athletic Association title. Three years later, he was a top midfielder on the only unbeaten team in the history of what is now Loyola University Maryland.

Perrella has a degree in accounting, but found joy working summers in kitchens. In 1990, across Belair Road from the Shrine of the Little Flower, where he attended grade school, he opened a short-lived restaurant that spawned his catering service. He also had a successful stint as Curley’s soccer coach in the 1990s.

He is grateful for his brothers, John and Jim; radiologist Dominic Staitti, who Perrella says “saved my life” in late December, when massive blood clots were found in his right leg; and too many others to name.

“If one of the clots had dislodged and gone to my brain, I would have had a stroke or died,” Perrella said. “I’m playing with house money. The good Lord has something else planned for me. I really feel that God has my back, to let me survive this long.”