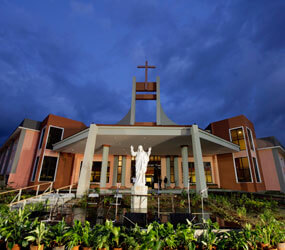 HAVANA – In a ceremony joined by President Raul Castro, Cuba’s Catholic bishops inaugurated the San Carlos and San Ambrosio Seminary Nov. 3, the country’s first major church-related construction in the half century since the revolution led by Fidel Castro.

Joined by Cuba’s bishops and representatives of the Vatican and of the Catholic Church in the United States, Mexico, Italy and the Bahamas, Havana Cardinal Jaime Ortega Alamino noted that the late Pope John Paul II blessed the first stone of the new seminary at a Mass during his January 1998 visit to the island.

At that point, then-President Fidel Castro pledged his support for the project, the cardinal said.

“That promise has been faithfully completed,” he said, adding his thanks to the Castros, “that this work was completed properly with the help of the state.”

Among the 300 guests attending the official opening were the apostolic nuncio to Cuba, Archbishop Giovanni Becciu; Miami Archbishop Thomas G. Wenski; Carl Anderson, supreme knight of the Knights of Columbus; and Mexican Archbishop Emilio Berlie Belaunzaran of Yucatan. Cuban government representatives included the foreign minister, the minister of culture, the head of the office of religious affairs of the ruling Communist Party and the historian of Havana.

A message sent in the name of Pope Benedict XVI said he hoped the seminary’s inauguration would be “a sign and a stimulus for a renewed commitment to strive for careful human, spiritual and academic preparation” for priestly ministry.

The message, sent to Cardinal Ortega by the Vatican secretary of state, Cardinal Tarcisio Bertone, invited seminarians to “increasingly identify themselves with the sentiments of Christ the Good Shepherd, through assiduous prayer, serious dedication to study, humbly listening to the divine word, dignified celebration of the sacraments and courageous witness of his love as authentic disciples and missionaries of the Gospel of salvation”.

The seminary, which can house 100 people, will open to students next year on 54 acres of former farmland southeast of Havana.

The Mexican newspaper La Jornada explained that in 1966, in the early days of the Castro regime when tensions with the church were high, the church was forced to turn to over to the government the previous San Carlos and San Ambrosio Seminary, built in 1948.

Classes were moved to a classic colonial cloister in Havana’s historic district, where they have been located ever since. That building will become a cultural center and studio, housing a library and space for exhibitions, concerts, theater and film screenings.

The country’s only other Catholic seminary is in Santiago de Cuba, on the southeastern coast.

Construction of the new San Carlos and San Ambrosio Seminary began in 2006. The stone blessed by Pope John Paul rests in a glass case at the seminary’s entrance.

The church covered the total cost of the work with donations from individuals, communities and international Catholic institutions. Cardinal Ortega specifically thanked donors, including the bishops’ conferences of the United States, Italy and Germany; the Pontifical Commission for Latin America; the Knights of Columbus; and Catholics in the United States, France, Spain and several Latin American countries.

The opening of San Carlos and San Ambrosio takes place at a time of marked improvement in relations between the Catholic Church and the state, after 50 years of ups and downs.

Analysts describe the current situation as “more relaxed,” since a dialogue process that began with a meeting in May between Raul Castro, Cardinal Ortega and Santiago Archbishop Dionisio Garcia Ibanez, president of the Cuban bishops’ conference.

As a result of that dialogue, in July the Cuban government began a process of releasing political prisoners. As of Oct. 21, 47 prisoners had been released on the condition that they voluntarily leave for Spain. Some are reportedly in the process of seeking residency in the United States, where many of the ex-prisoners have family.