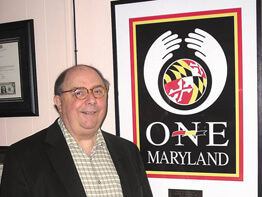 While he no longer casts a vote or wields a gavel, Mr. Taylor serves as an influential lobbyist with the Alexander & Cleaver law firm – working on behalf of healthcare, wellness, nonprofit and business clients on public policy issues.

The parishioner of St. Mary in Cumberland is also a member of the administrative board of the Maryland Catholic Conference, where he advises the public-policy making arm of Maryland’s Catholic bishops and is a key player in raising funds for the MCC’s new headquarters at 10 Francis Street in Annapolis.

Having earned a bachelor’s degree in government from the University of Notre Dame in Indiana as a young man, Mr. Taylor said he has a lifelong passion for public service.

In an interview with The Catholic Review in his downtown Cumberland office, Mr. Taylor reflected on life after the speakership. He talked about several hot-button issues including his stance on a contentious handgun law, the death penalty and what he called a “divisive” political climate. He also related how his Catholic faith helped shape his worldview.

The large framed photograph hanging on a wall in his office shows a beaming Mr. Taylor at one of the most important and controversial moments of his long tenure as speaker.

With President Bill Clinton standing behind him and resting a hand on the speaker’s right shoulder, Mr. Taylor is seen sitting side-by-side with Gov. Parris N. Glendening as the governor prepared to sign a bill requiring trigger locks on new handguns in Maryland.

Despite resistance from some of his conservative constituents in Western Maryland, Mr. Taylor supported the measure and helped make Maryland the first state in the country to mandate trigger locks. It was a decision that directly contributed to the mild-mannered lawmaker’s defeat in the 2002 election.

The former speaker said he doesn’t regret his vote. His opponents used it to paint him as a radical on gun control, he said, when the real issue was safety.
Sitting in an office whose walls are lined with countless awards and honors from organizations and institutions across the state and around the country, Mr. Taylor said the gun issue is just one example of “mean-spirited” and “divisive” politics that is poisoning lawmaking in Annapolis and Washington.

“Requiring trigger locks to be put on new hand guns is clearly a safety issue and not a gun control issue,” said Mr. Taylor, a 72-year-old Democrat who earned a reputation in the state capitol as a hardworking, non-confrontational consensus builder willing to consult legislators of both political parties.

“That legislation didn’t take one pistol away from anyone,” he said, emphasizing his long support for the constitutional right to bear arms. “It simply made new pistols in Maryland safer.”

Mr. Taylor said his political opponents distorted his position – an all-too-common occurrence in the political climate of the last several years, he said.
“America right now is going through a period of severe political divisiveness that is very destructive in attempting to create a collegial society and we’ve got to overcome that,” he said.

The former speaker said “extremism” in the Maryland General Assembly has been shown on both sides of the aisle, creating an “unworkable” atmosphere in which to create public policy.

The atmosphere has improved during the last session of the General Assembly, he said, as the state executive and lawmaking bodies now come from the same political party with election of Democratic Gov. Martin J. O’Malley following the four-year term of Republican Gov. Robert L. Ehrlich Jr.

“My hope would be that we have experienced a reawakening of a collegial atmosphere,” he said.

Against the death penalty

If there’s one vote Mr. Taylor said he wish he could change, it was his 1978 vote as a delegate to reinstate the death penalty in Maryland. Mr. Taylor was elected to the House of Delegates in 1974 and was speaker from 1994-2003.
“I think this is a question of always believing in that position (opposing capital punishment), but weighing when you’re in elective office in a republican democracy how much of your own conscience should supersede the wishes of your constituents,” said Mr. Taylor.

Now out of elective office, the former speaker was much more vocal about his opposition to the death penalty.

“I’m convinced that it serves no purpose,” said Mr. Taylor, speaking in his characteristically deliberative style – carefully choosing each word between pregnant pauses and gentle taps on the table.

“It serves absolutely no purpose and it is clearly not our right to put people to death,” he said.

The former speaker said his Catholic faith plays a “tremendous role” in shaping his world view. A graduate of St. Michael School in Frostburg and the now-closed LaSalle High School in Cumberland, Mr. Taylor and his wife, Polly, have strong ties to the three Cumberland parishes of St. Mary, Ss. Peter and Paul and St. Patrick.

One of the highlights of his life was meeting Pope John Paul II during the late pontiff’s visit to Baltimore in 1995, Mr. Taylor said.

“His eyes pierced you,” said the former speaker, a classical pianist who favors the works of Chopin and who gave fleeting thoughts of becoming a concert pianist as a teen.

“He is the hero in my life,” he said. “He had such a commanding presence and such an open heart.”

The former speaker said it is critical for Catholics to voice their concerns in Annapolis on a wide variety of issues.

Pointing to some of his achievements as speaker, Mr. Taylor said he was proud to push initiatives to improve health care and public education, but he was most proud of his “One Maryland” initiatives.

Designed to help struggling parts of the state, One Maryland offered tax credits for businesses that invest in places like Baltimore City, the Eastern Shore and his beloved Western Maryland.

As one of Western Maryland’s greatest champions, Mr. Taylor helped win support for many projects to strengthen Allegany and Garrett counties, including Rocky Gap Lodge and Golf Resort and Canal Place in Cumberland.

“I’m very proud of a long list of initiatives that were accomplished for Western Maryland because I’ve always believed to this day that
Western Maryland needs more help than most of the rest of the state,” he said.

Mr. Taylor is currently lobbying to bring major wind farms to Allegany and Garrett counties through the U.S. Windforce Corporation.

“It’s the cleanest energy you can get and not only is it clean and without any pollution to worry about, it is also competitive in cost,” said Mr. Taylor, suggesting the project could be in operation within two years.

Does he miss his role as speaker?

“Oh, sure,” he said. “I have a very deep love and respect for the legislative branch of governance and to have had the honor and the trust of the public and my peers gave me tremendous satisfaction working for the quality of Maryland life.”