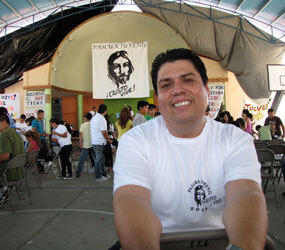 APATZINGAN, Mexico – Father Javier Cortes vividly recalls being approached recently with an unusual request by a group of teenagers in this agricultural town 300 miles west of Mexico City.

There, La Familia Michoacana, a quasi-religious drug cartel, dumped four human heads at a prominent public monument during Holy Week as a warning to its rivals.

“Some young people said, ‘Father, I’ve come so that you will bless me because I’m going to kill Zetas,’” he said, referring to the gang of rogue former soldiers and police officers that La Familia members considers their mortal enemies.

Father Cortes, who is rector of the local seminary, rebuked the plan and refused to bless the killing spree.

Such violence has become common, however, and has contributed to more than 19,000 deaths since President Felipe Calderon took office in December 2006 and promised to crack down on violent drug cartels.

The violence increasingly is claiming young lives as well. Authorities blame the cartels and gangs affiliated with them for massacres such as the January murder of 15 youths at a birthday party in Ciudad Juarez and the Palm Sunday murders in Durango state of 10 young people who were returning to their communal farm.

But the request made of Father Cortes highlighted an even more disturbing trend in drug-related violence, as young people are increasingly recruited by the cartels and lured into the seemingly easy money of the drug trade.

“We’re talking about a lost generation of young people that is falling into the networks of narcotics trafficking,” said security expert Pedro Isnardo de la Cruz, who teaches at the National Autonomous University of Mexico.

He attributed the recruitment of young people to a combination of factors that include Mexico’s long-underperforming economy, family breakdowns and the seduction of the cartels.

Church leaders and young people concurred and said such factors are at play in Apatzingan, the hub of an economically neglected region of downtrodden communal farms and lemon groves known as Tierra Caliente, or Hot Earth.

The region has a decades-old drug trade. But Freddy Castaneda, a youth minister in the Apatzingan Diocese, said it previously was “something very vague” and young people were seldom recruited.

That changed with the turf war between La Familia and Los Zetas, which exploded in November 2006 when La Familia announced its arrival by tossing six human heads into a seedy nightclub.

Now, Castaneda said, “When you go into any neighborhood, out of every 10 families, six will be somehow involved” with the drug trade.

Castaneda and others described Tierra Caliente as a region of few legal economic opportunities, where teenagers once spoke of heading to the United States. Now, young people aspire to jobs with La Familia, with the goal of emulating their newly rich peers who cruise the city’s main streets on weekend nights in new trucks with the music blaring.

“In school, there are guys whose only ambition is to become a drug dealer,” said 15-year-old Emma Jaimes. “One week these guys are poor. Next thing you know they’re rich.”

“They want to be drug dealers so they can get respect, get a car, get whatever girl they want … it’s all that they think about,” he said.

De la Cruz said young people flirting with the cartels deceive themselves with the idea of the “easy life being within their reach,” but there are few alternatives to dissuade them.

“The cartels have an enormous ability to attract (young people) that is very, very seductive, which has to be seen alongside the current economic situation,” he said. “The Mexican economy isn’t creating enough jobs for this segment of young people.”

The youth ministry program in Apatzingan is attempting to intervene with children and adolescents before it’s too late. During Holy Week this year it held events for 200 young people that promoted an awareness of human rights and included charity projects and a march for peace in Tierra Caliente.

Promoting Easter events has become more difficult, however. Castaneda said previous events would attract up to 500 youths. Now, temptations such as going to the beach during the traditional Mexican holiday period and the involvement of families in the drug trade have made the church’s Easter events a tougher sell.

Still, the youth ministers in Apatzingan refuses to give up – even on those who have fallen into the temptation of the drug trade.

“We have hope,” Father Cortes said. “All of these young people have a good seed somewhere inside of them.”