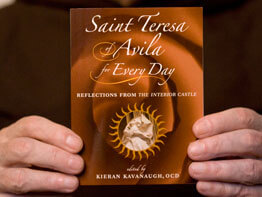 With this year’s publication of the second and final volume of “The Collected Letters of St. Teresa of Avila” by the Washington-based Institute of Carmelite Studies, Father Kavanaugh has now translated all of the works of the Carmelite mystics and spiritual giants St. John of the Cross and St. Teresa of Avila for the contemporary English-speaking world.

To mark the 50 years of Father Kavanaugh’s life’s work and the completion of the translation project, his Carmelite confreres at the institute contributed essays to a book honoring the priest-translator. Titled “A Better Wine: Essays Celebrating Kieran Kavanaugh, OCD,” the recently released volume was also published by the order’s ICS Publications.

“A Better Wine” takes its title from the story in John’s Gospel of the wedding at Cana, in which, after Jesus changes water into wine, the steward announces to the wedding’s host, “You have saved the better wine until now.”

According to the book’s editor, Discalced Carmelite Father Kevin Culligan, the title is an apt one to celebrate Father Kavanaugh’s life and ministry: Eucharist – bread and wine becoming the body and blood of Christ – is transformation without parallel; the contemplative living taught by the Carmelite saints is similarly God’s great work of transformation of the human person.

Thus, the Cana image seemed doubly appropriate to celebrate “a Carmelite priest whose ministry for 50 years has been the transformation of our lives in God through love,” Father Culligan said in a phone interview.

The celebratory volume has been a long-awaited gift for Father Kavanaugh. It was first planned for his 75th birthday, then for his 50th anniversary of ordination to the priesthood.

When “A Better Wine” came off the press last year, the timing was even more significant: The order presented the book just as Father Kavanaugh completed his translation of the last volume of St. Teresa’s letters – an accomplishment that effectively marked the close of his lifetime of translating the works of St. John and St. Teresa.

Since 1957 – almost his entire priestly ministry – the Milwaukee native has dedicated his life to translating the thousands of pages that comprise the works of the 16th-century Spanish Carmelite spiritual masters, Sts. Teresa of Avila and John of the Cross, from the original Spanish into standard American English.

The fresh translations – which Father Kavanaugh regularly updated with new scholarship – have helped to bring the spiritual teachings of these two famous but often previously unread Carmelite saints into the lives of modern scholars of all religious traditions.

Today these affordable translations are available from the United States to the Philippines, and from Africa to Great Britain.

Father Kavanaugh is not only known for his translations, but is also an internationally recognized expert on Carmelite saints and spirituality. His 10-page bibliography lists 82 published articles, essays, reviews and translations on Carmelite themes, published in English, Spanish and Italian.

In addition to his translations and other writing, the friar’s five decades-plus of priestly ministry have been rich and varied. He is a charter member of the Institute of Carmelite Studies, as well as of the Carmelite Forum, which includes men and women scholars representing both Carmelite branches, the Discalced and the Ancient Observance.

He is in frequent demand for retreats, lectures, seminars and workshops, both in the United States and in Europe, Asia and Africa.

Father Kavanaugh has served in numerous elected posts within the order, including local superior, provincial councilor, vicar-provincial and delegate to provincial and general chapters. He has also served as spiritual liaison to various Carmelite secular communities and to those communities of Discalced Carmelite nuns under the jurisdiction of the provincial.

Currently, he is the Washington province’s postulator, or promoter, of causes for canonization of Discalced Carmelite friars, nuns and lay members.

When Father Kavanaugh is not busy translating, editing or in other ministerial responsibilities, Father Culligan said, he can “be found praying, doing dishes or answering the phone” in his community’s monastery in Washington.

Editor’s Note: Information about ordering “The Collected Letters of St. Teresa of Avila” and “A Better Wine” is available online at: www.icspublications.org.