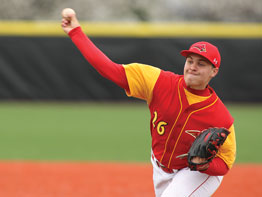 It only took one inning of offense to notch another MIAA A Conference win for the Calvert Hall College High School Cardinals baseball team, which trounced Loyola Blakefield 9-0 on April 7 on the Cards’ new home field.

Prior to the game, the Cardinals’ new state-of-the-art synthetic baseball field was dedicated and blessed before a standing-room-only crowd and its entire student body at the Towson school.

The $1.8 million project was heavily underwritten by Carlo Crispino, a 1948 graduate and former player for The Hall. Mr. Crispino threw out the first pitch, and the Cards got to work against the undefeated Towson Dons.

The Cardinals (4-0, 9-3) were briefly ranked top in the nation in mid-March by Baseball America and have three consecutive MIAA A Conference titles under their belts. After their stellar offensive attack against the Dons, it looks like the defending champions are on their way to yet another title in mid-May.

The Cards’ top hurler, senior Mike Dillon, diligently went to work in the top of the first, leaving the Dons scoreless.

With the Loyola infield in and bases loaded, senior catcher Luke Sawyer tagged a fly ball to the warning track in straight-away centerfield to score junior Evan Cain. The Cards took a 3-0 lead and never looked back.

After scoring three runs in the first inning, the Cards kept their offense in motion. The team picked up two runs in each of the second, third and fifth innings, again led by Blair, Lingerman and Anderson.

There’s no doubt the Cards can put up the runs, defeating Mount St. Joseph High School in Irvington 14-3, Gilman 7-5 and McDonogh, 4-1, but in addition, their defense is strong and their pitching is tight.

The Cardinal baseball program had the perfect program season, 75-0, in 2007 with the varsity, junior varsity and freshman/sophomore teams going undefeated. Currently the varsity program is ranked first in the Metro Prep poll with Archbishop Spalding High School, Severn, on its heels.