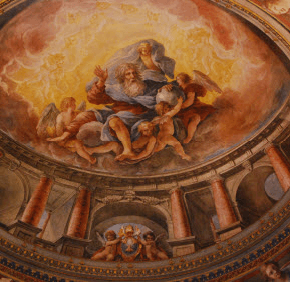 ROME – As Pope Benedict XVI welcomed 22 men into the College of Cardinals Feb. 18 at St. Peter’s Basilica, he gave each three symbols of their new role: a scarlet biretta, a ring depicting early Apostles Saints Peter and Paul, and a scroll.

The scroll is a papal bull assigning the new cardinal a titular church, making him the honorary pastor of a church in Rome and therefore a member of the clergy of Rome.

Cardinal Edwin F. O’Brien noted in his homily at a Mass of Thanksgiving in Baltimore March 4 that the tradition goes back to the days when bishops were elected by the local clergy.

That tradition still holds in electing the Bishop of Rome, the pope; the members of the College of Cardinals who elect the pope are assigned titular churches in Rome to more closely connect them to the clergy of Rome.

For his titular church, Cardinal O’Brien was assigned San Sebastiano al Palatino (St. Sebastian on Palatine Hill). The week before the consistory, the cardinal tried to visit the church, but “It was locked,” he said at a news conference after the consistory.

The church, which was also the titular church of his predecessor as grand master of the Equestrian Order of the Holy Sepulcher Cardinal John P. Foley, is not a typical tourist site. It’s open only a few mornings a week.

Just southwest of the Colosseum, and off the beaten tourist path, up a hill closed to through traffic, and nestled amidst archaeological digs, is this small church dedicated to a martyr of the third century, San Sebastiano.

Open only Monday, Wednesday and Friday mornings, it is highly sought for weddings with its intimate interior and lovely garden terrace outside.

The history around and underneath this church is extensive. The story is that a Roman temple honoring the Sun was built at this site by Emperor Heliogabalus. In the third century, San Sebastiano was believed to have been martyred on this spot.

The Roman emperor Diocletian ordered Sebastiano to be tied to a pillar and shot with arrows until he died, but he was found still alive and nursed back to health. Later he publicly criticized Diocletian and was then clubbed to death in 288. That’s why some say he was martyred twice.

San Sebastiano is the patron saint of archers, athletes, plumbers and soldiers; his feast day is Jan. 20

In the 10th century, a church and monastery were built on the spot. The church was rebuilt in 1624, though much of it was destroyed during renovations under Pope Urban VIII. The original frescoes are protected by glass behind the altar in the apse of the church. They depict Sts. Lawrence, Stephen, Sebastian and Zoticus as deacons. Under that, angels surround the Blessed Mother. The frescoes are a wonderful glimpse at the church’s original decor.

The domed ceiling is beautiful, painted with trompe l’oeil windows and pillars.

With seating for less than 100, the historic church can’t hold large crowds, but it looks as if it’s been waiting for a new honorary pastor.

A short, gravel path runs from the main gate, called the gate of Vigna Barberini, adorned with a painting of Sebastiano’s martyrdom, to the church and a gate at the far end that overlooks the remains of an ancient temple.

San Sebastiano is just one of more than a few hundred churches in Rome and Baltimore’s other cardinals have connections to three churches of interest.

Cardinal O’Brien began a pilgrimage with more than 150 people from the Archdiocese of Baltimore and members of the Order of the Holy Sepulcher at Santa Maria degli Angeli, titular church of his predecessor, Cardinal William H. Keeler.

During his homily at the Mass Feb. 15, Cardinal O’Brien said, “In a special way we pray for Cardinal Keeler, keeping him in mind in this Eucharist especially.”

Santa Maria degli Angeli was designed by Michelangelo in 1563 and built inside the walls of the baths of Diocletian. The church was dedicated to the Christian slaves who perished during constructions of the baths and to the Virgin Mary and the angels.

Cardinal Lawrence Shehan’s titular church was the Basilica of St. Clement, which is actually a three-tiered complex. The current basilica, built circa 1100, is built on top of a fourth-century basilica, which in turn was built over the home of a Roman nobleman from the first century A.D.

The basilica houses some important relics of saints, including St. Clement himself and St. Ignatius of Antioch. St. Clement’s relics were returned from the East to the city by Ss. Cyril and Methodius, the Apostles to the Slavs, on their mission to Rome in 867, and enshrined here by Pope Adrian II, according to information on the website of the Pontifical North American College. Two years later, in 869, St. Cyril passed away in Rome, and his relics were likewise enshrined here soon thereafter.

About a 20 minute walk from St. Peter’s Basilica lies Cardinal James Gibbons’ titular church, Santa Maria in Trastevere (St. Mary’s Across the Tiber). The site has connections to the Christian faith from before the birth of Christ. How can that be? According to “Procedamus in Pace,” a book on the station churches of Rome prepared by the North American College, legend says that in 38 B.C., a spring of oil came up out of the ground at what is now the site of the basilica, the spring interpreted as a symbol of the coming of the Savior. “Some centuries later, Pope St. Callistus I was cast into a well near this site because of his profession of Christianity,” the book notes.

The basilica features beautiful statues and mosaics, including a statue of St. Francis at which pilgrims place notes, petitions and prayers.

One has to look carefully for it, but a plaque commemorating Cardinal Gibbons’ connection to the church from 1886 to 1921 graces a pillar near the altar. As you approach the altar, the plaque is on the rear side of the pillar on the left of the altar. A similar plaque commemorating the basilica as the titular church of Cardinal Stefan Wyszy?ski of Poland from 1953 to 1981 graces the opposite pillar on the right side.

Contributing to this story was Ann M. Augherton of the Arlington Catholic Herald.