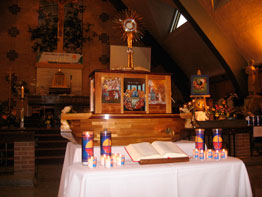 QUEBEC CITY – About 40 cardinals and bishops from the United States are among the nearly 500 Americans who have registered for the 49th International Eucharistic Congress in Quebec City June 15-22.

Not surprisingly, said Monsignor Jean Picher, secretary-general of the congress, most that have signed up are from the northeastern United States, an area geographically close to Quebec. He said in an interview in late April that many of them also have ancestral links to Quebec, founded 400 years ago by Samuel de Champlain and known as “the cradle of French civilization in America.”

“I think this number could easily double in the next few weeks because it’s so easy to travel from the United States to Canada,” said Monsignor Picher. “And we would like very much to have American Catholics share their religious experience with us.”

Archbishop Donald W. Wuerl of Washington will be the first speaker at the opening plenary session the first full day of the congress, June 16. Archbishop Wuerl is chairman of the U.S. bishops’ Committee on Evangelization and Catechesis and chairman of the board of the National Catholic Educational Association.

The official opening ceremony and the opening of the eucharistic adoration sites are to be held June 15 in the coliseum in ExpoCite, the exhibition complex where most of the congress events and the plenary sessions will be held. For the weeklong congress the complex is being dubbed “Eucharist City.”

“ExpoCite is a big complex where you have six or seven buildings,” said Sister Doris Lamontagne, a member of the Little Franciscans of Mary and assistant secretary-general of the congress. “The coliseum will be used in the mornings for the plenary sessions, and we’ll use a small hall near the middle of ExpoCite for the perpetual adoration.”

The youth-inspired Ark of the New Covenant – an icon-covered chest carried on foot to the more than 70 dioceses and eparchies in Canada – will be housed in the chapel throughout the congress. The ark’s pilgrimage began in Rome two years ago with a papal blessing and will arrive in Quebec City May 25 for the feast of Corpus Christi.

Sister Doris said that because of the ark’s travels and the publicity it has generated many people have been able to reflect on the importance of the Eucharist and the “presence of Jesus” in their lives. As a result, the people who come to the Congress “will be an expression of the many other people who will be in touch with this event throughout the week,” she said.

There are still many details to be resolved before the congress begins, “but I think it will be a wonderful adventure,” said Monsignor Picher, who attended the International Eucharistic Congress in Guadalajara, Mexico, in 2004.

The congress is part of the celebration of Quebec’s 400th anniversary and the 350th anniversary of the appointment of Blessed Francois de Laval as Canada’s first bishop.