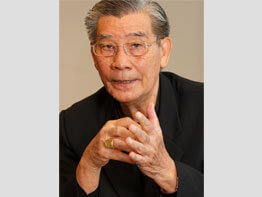 WASHINGTON – As a cardinal from Vietnam began his U.S. tour, he advised Vietnamese Catholics living in North America to integrate with the faithful in their newly adopted country, but remain close to the culture of their homeland and remember its martyrs.

“I tell them, ‘You are here, you are not’“ refugees anymore, said Cardinal Jean-Baptiste Pham Minh Man of Ho Chi Minh City in English.

“I tell them, ‘You should be a witness of faith for the people here,’“ Cardinal Man said.

The cardinal, who spoke to Catholic News Service in Washington June 24, discussed his U.S. tour, how he views recent dialogue between the Vatican and the Vietnamese government, and the role Vietnamese Catholics living in North America should have with the church in their homeland.

In the past several years, the cardinal said he has traveled to more than a dozen countries where Vietnamese Catholics now live and routinely encourages them to adapt to their local church communities while remembering Vietnam.

“There is much they can learn when they integrate in the American society and local church and much of that knowledge, experience and enriched faith they can share with the church back home,” he said. “It doesn’t have to be (giving back) just with money. They can come back … and show us the good things they’ve learned.”

In the 1970s, Vietnam’s communist regime stripped the Catholic Church of its hospitals, schools and much of its property, Cardinal Man said. That makes it nearly impossible for Catholics in Vietnam to participate in charitable causes, he said.

The hope Cardinal Man said he sees in his country is that the government has opened a dialogue with the Vatican about the possibility of the state giving the church back some of the property it confiscated in the 1970s.

Though only a portion of one property in the central region of Vietnam has been given to the Catholic Church, the mere fact that the government is willing to discuss the matter is viewed as progress, he said.

The Vatican and Vietnam do not have diplomatic relations, but Vatican diplomats make annual visits to Vietnam to discuss church-state relations and specific questions related to the appointment of bishops, seminary enrollment and the functioning of Catholic institutions.

A three-man delegation, headed by Monsignor Pietro Parolin, Vatican undersecretary of state, met with a variety of government and church leaders during its June 9-15 visit to Vietnam.

Vietnam continues to insist on approving the Vatican’s candidates for bishop before their nominations are announced.

Noting there is a need for more vocations, Cardinal Man said he only has 600 priests in his archdiocese of more than 650,000 Catholics.

Cardinal Man planned to leave for Houston June 26 to visit family; from there he was to fly to Los Angeles to help Cardinal Roger M. Mahony of Los Angeles set up a sister parish in his archdiocese, and then to Seattle to concelebrate a Mass with Seattle Archbishop Alexander J. Brunett.

“We will also be inviting Catholic leaders from North America to Vietnam in 2009 and 2010 for our jubilee, 50 years with a Catholic hierarchy,” Cardinal Man said.

Though Catholic missionaries first began evangelizing in Vietnam 500 years ago, the first dioceses were not established in the country until 1960, he said.