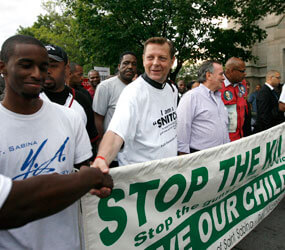 CHICAGO – As temperatures climbed and most schools closed for the summer, church leaders called on their congregations to step forward and protect young people from the violence that often seems pervasive in Chicago.

In a letter sent to parishes for their June 26-27 bulletins, Cardinal Francis E. George wrote: “Gunshots and gang violence, rooted often in verbal and physical abuse at home, can scar children and youth. The sad reality of daily life is that our youth and their families often live under a veil of fear. Such an environment hinders the normal development of children, youth and their families.

“The daily threat of violence is greater in inner-city neighborhoods,” the cardinal added. “A number of our Catholic parishes in these communities are already providing secure spaces in churches, gymnasiums and other parish buildings for play, exercise and prayer.”

He thanked those pastors and parishioners but said, “There is a need for more of our parishes to provide safe haven as well, and I ask our pastors and their congregations to work toward offering this.”

St. Sabina Parish on Chicago’s South Side offers many opportunities for children and young people to stay safe and keep growing in faith and leadership, as well as offering all members of the community an opportunity to speak out against violence.

On June 18, the last day of classes for Chicago public schools, Father Michael Pfleger, St. Sabina’s pastor, led a rally and march to “Silence the Violence.”

Among the more than 300 participants were Chicago Mayor Richard M. Daley, Police Superintendent Jody Weis, public schools chief executive officer Ron Huberman, U.S. Sen. Roland Burris, D-Ill., and the newly named director of Chicago’s community policing initiative, Ron Holt, whose son, Blair, was shot and killed on a city bus in May 2007 while trying to shield a friend from bullets.

The group walked from the church down 79th Street to Halstead, making a loop of about a mile and a half, chanting slogans such as, “Stop the violence,” while waving at children in windows and passers-by.

Khari Riley, 16, is a member of St. Sabina’s choir and has participated in many such marches, she said.

“I think it’s important for us to get our message out,” said the Mother McAuley Liberal Arts High School student. “I don’t care how far we have to walk. This is one of the few times we get our voices heard.”

Tonia Carr of the Knights of Peter Claver Ladies Auxiliary also marched. She attended St. Sabina School as a child, lives in the community and still worships there.

Anti-violence marches show people they are not alone, Carr said. They help people feel less isolated and help give them the courage to speak out against violence.

Adults must go out and take back their blocks, Daley said, and take responsibility for their children.

Father Pfleger, who lost a foster son to gunfire in 1998, compared the blood shed by gun violence to the oil spill in the Gulf of Mexico, calling it an “urban spill.”

“This urban spill is not just affecting wildlife and the fishing industry, but, it’s affecting our children and the future of our country,” the priest said. “Get involved and get aggressive because we will protect our children, and we will save our future.”