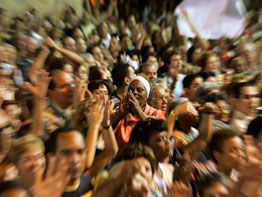 HAVANA – At a meeting with Cuban bishops and an open-air Mass, Cardinal Tarcisio Bertone, Vatican secretary of state and the highest-ranking Catholic Church representative to visit Cuba in the past 10 years, said he hoped his visit would help advance church-state relations.

Cardinal Bertone conveyed to the bishops and Cuban Catholics a message from Pope Benedict XVI, expressing the pontiff’s “ardent goal of renewing the true evangelizing impulse” that Pope John Paul II left “deeply ingrained in the hearts of all” in January 1998.

He also expressed the pope’s “esteem … for your tireless pastoral efforts, as well as my closeness to the aspirations and concerns of all Cubans.”

Cardinal Bertone arrive in Cuba Feb. 20, a day after President Fidel Castro announced his resignation. On Feb. 21, he celebrated the outdoor Mass and met with the bishops, the first items on an itinerary that was to keep him in Cuba until Feb. 26.

After the cardinal’s meeting with the bishops, Havana Auxiliary Bishop Juan Hernandez Ruiz told reporters that the cardinal’s words were marked by “solidarity, affection and closeness,” and that the cardinal had explained that “his visit was a way of accompanying us on this new stage of life for the country, the church and for us, too.”

The bishop said there was an open dialogue during which the Cuban bishops expressed concerns to which Cardinal Bertone responded “clearly and comprehensively.”

“He is a very cordial person, with an enormous ability to understand the questions and the context in which they are being asked,” Bishop Hernandez said.

Cardinal Bertone told the bishops he hoped the 10th anniversary of Pope John Paul’s visit to Cuba in January 1998 would give new impetus to relations between the Cuban government and the Catholic Church.

In a “spirit of respect and mutual understanding, the church can fully carry out her mission, which is strictly pastoral and in the service of the faithful, with due freedom,” he said.

He urged the Cuban bishops “to further intensify their pastoral work, if that is possible,” and assured them that Pope Benedict “knows the situation of the Cuban church well.”

At the Mass he concelebrated with Cuban Cardinal Jaime Ortega in the plaza outside the Havana cathedral, Cardinal Bertone called for the church to have more leeway to carry out its work and contribute to the well-being of the Cuban people.

“The church wishes to expand its action to other areas, without limitations, to contribute unwaveringly to the well-being of the Cuban people,” the cardinal said during the Mass, which was broadcast live by the island’s two state-run TV channels.

The Mass was attended by Cuban government authorities, including Ricardo Alarcon, president of the National Assembly, and Foreign Minister Felipe Perez Roque, as well as hundreds of Catholics of all ages.

“In Cuba, Christian and ecclesial charity also has some manifestations in the education of children and young people with learning difficulties, and we are hopeful that the church can broaden its efforts without reserve in this important area of its mission,” Cardinal Bertone said.

He stressed that the church “hopes to be increasingly present and active in the midst of society, in ways appropriate to today’s world, carrying out its urgent mission of teaching, healing, helping the poor and promoting the dignity of all people … whether marginalized, displaced or imprisoned.”

During the Mass, Cardinal Bertone also mentioned the “incalculable good” done by religious who care for the elderly, the sick and the poor in Cuba.

He remarked on Pope Benedict’s “spiritual closeness” to the Cuban people, as well as “his encouragement that they continue along the path they are traveling.”

The pope “knows your longings and concerns,” he said, and expressed the hope that “at some point in the future, the Holy Father can visit” Cuba in response to the invitation extended by the Cuban government in 2005.

During the Mass, Cardinal Ortega said he hoped the occasion was “the harbinger” of a papal visit to Cuba.

Bishop Hernandez said the pope’s message was “unexpected, to a certain extent,” and that it expressed “great affection” and included important points in which he asked the bishops to “give generously of themselves” and expressed “great concern for the priests and for priestly vocations.”

Bishop Jorge Serpa Perez of Pinar del Rio told the Spanish news agency EFE that Cardinal Bertone’s remarks “have been very enriching,” because “it is obvious that he understands the life of the Cuban church.”

“He brought us a message from the Holy Father full of hope and courage, because life in any country in the world is always a life of work, of many contradictions, and if the head isn’t enthusiastic, then the body is not revived,” he added.

On Feb. 22, Cardinal Bertone was scheduled to visit the Carmelite Sisters’ convent in Havana and meet with the president of the Cuban conference of religious. He also was to travel to Santa Clara, in central Cuba, where he was to celebrate Mass Feb. 23 and dedicate the first public monument honoring Pope John Paul.

Later that day, he was to travel to the national sanctuary of Cuba’s patroness, Our Lady of Charity of El Cobre, in the eastern province of Santiago de Cuba, where he was to celebrate Mass and pray the rosary with youths and other Catholics.

Cardinal Bertone also was to visit the Diocese of Guantanamo-Baracoa, created by Pope John Paul 10 years ago. On Feb. 25 he was scheduled to meet with officials at the Ministry of Foreign Relations and attend a conference at the University of Havana.

Cuban church sources said they hoped the Vatican secretary of state would be able to meet with the country’s provisional president, Raul Castro.