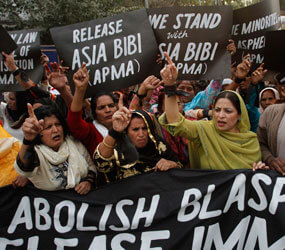 VATICAN CITY – Pakistan’s president may not have the political strength needed to abolish the anti-blasphemy law that places Christians at risk, but he has promised to try to revise the law, said Cardinal Jean-Louis Tauran.

The cardinal, president of the Pontifical Council for Interreligious Dialogue, spent four days in Pakistan in late November and met there with President Asif Ali Zardari, he told Vatican Radio Dec. 1.

“He demonstrated great interest in the Holy See’s position on religious freedom,” the cardinal said.

President Zardari has formed a commission “to reexamine the blasphemy law with a view toward possibly eventually abrogating it,” Cardinal Tauran said.

“I told the president and everyone else I met that Christians in Pakistan are under the impression that they are considered second-class citizens,” Cardinal Tauran said.

The country’s blasphemy laws make insulting the Quran, the sacred book of Islam, an offense punishable by life imprisonment, while being found guilty of insulting the Prophet Mohammed brings an automatic death sentence.

The Catholic Church, other Christian groups and human rights observers repeatedly have complained that making an accusation is so easy and disproving it is so difficult that the blasphemy law is often abused as a way to harm a Christian with whom one has a complaint or grudge.

Cardinal Tauran told Vatican Radio, “The president is aware of the fact that authorizing a revision of the law would expose him to strong criticism. But I sincerely believe that he realizes this law must at least be revised.”

In mid-November, Pope Benedict XVI added his voice to international calls for the release of a 37-year-old Christian woman, Asia Bibi, who faces the death penalty in Pakistan after being convicted of blasphemy. Vatican Radio reported that the charges were filed against Bibi after she had an argument with a group of Muslim women.