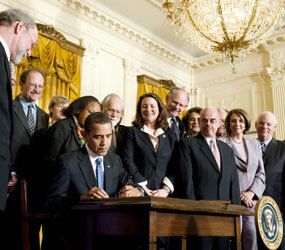 WASHINGTON – President Barack Obama’s executive order reversing the ban on federal funding of embryonic stem-cell research represents “a sad victory of politics over science and ethics,” Cardinal Justin Rigali of Philadelphia said shortly after the March 9 signing of the order at the White House.

The chairman of the U.S. Conference of Catholic Bishops’ Committee on Pro-Life Activities was among Catholic, pro-life and other leaders who criticized the reversal, which President Obama had promised during his campaign.

Speaking in the East Room of the White House, President Obama said the stem-cell policy of former President George W. Bush, in effect since Aug. 9, 2001, had forced “a false choice between sound science and moral values.”

President Obama also urged Congress to consider further expansion of funding for such research, including the creation of new embryonic stem-cell lines. Since 1995, the Dickey/Wicker amendment to the annual appropriations bills for federal health programs has barred federal funding of research involving the creation or destruction of human embryos.

But the president had strong words against human cloning, which he said is “dangerous, profoundly wrong and has no place in our society, or any society.” He said he would work to ensure that “our government never opens the door to the use of cloning for human reproduction.”

Among the several dozen people present at the White House for the signing were members of Congress, scientists, families whose members had been or could be affected by stem-cell breakthroughs, and representatives of the Episcopal and United Methodist churches, several Jewish bodies and the Interfaith Alliance.

President Obama said a “majority of Americans – from across the political spectrum, and of all backgrounds and beliefs – have come to a consensus that we should pursue” embryonic stem-cell research.

But Cardinal Rigali said the executive order “disregards the values of millions of American taxpayers who oppose research that requires taking human life” and “ignores the fact that ethically sound means for advancing stem-cell science and medical treatments are readily available and in need of increased support.”

He reiterated points raised by Cardinal Francis E. George of Chicago, USCCB president, who said in a Jan. 16 letter to Obama that a change in the policy on funding of embryonic stem-cell research “could be a terrible mistake – morally, politically and in terms of advancing the solidarity and well-being of our nation’s people.”

President Obama said he “cannot guarantee that we will find the treatments and cures we seek. No president can promise that.”

“But I can promise that we will seek them – actively, responsibly and with the urgency required to make up for lost ground,” he added.

The Bush policy had allowed funding of embryonic stem-cell research only when the stem-cell line had been created before Aug. 9, 2001. The executive order President Obama signed permits federal funding of stem-cell lines created since then, but would not allow funding of the creation of new lines, leaving that decision to Congress.

President Obama also signed a “presidential memorandum on scientific integrity” March 9, ordering the director of the Office of Science and Technology Policy to develop a strategy for ensuring that “the administration’s decisions about public policy be guided by the most accurate and objective scientific advice available.”

He said scientific advisers should be appointed “based on their credentials and experience, not their politics or ideology.”

Rep. Chris Smith, R-N.J., the author of a 2005 law authorizing $265 million in federal research funds for adult stem cells from cord blood and bone marrow, asked in a statement: “Why does the president persist in the dehumanizing of nascent human life when better alternatives exist?”

“On both ethics grounds and efficacy grounds nonembryonic-destroying stem-cell research is the present and future of regenerative medicine – and the only responsible way forward,” Mr. Smith added.