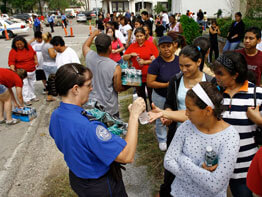 HOUSTON – Cardinal Daniel N. DiNardo of Galveston-Houston told archdiocesan employees Sept. 17 that in the aftermath of Hurricane Ike his “major preoccupation right now” is the number of people who are lacking food and water and facing “difficulties with gasoline and lack of power.”

“There are areas in our diocese where people are suffering,” he said.

The cardinal encouraged everyone to assist the local office of Catholic Charities and the St. Vincent de Paul Society in assisting those in need.

He made the comments at the end of a meeting at the chancery where employees learned how the archdiocese weathered the storm.

Although about half of its 160 parishes sustained some damage from Hurricane Ike as it came ashore Sept. 13, the Archdiocese of Galveston-Houston was in relatively good shape, according to Meredith Smith, director of risk management for the archdiocese.

“It’s important to realize that what has happened to us in the majority of the parishes is no worse than what happens in a really bad thunderstorm in the summer,” said Ms. Smith. “That’s the type of damage that we’re seeing, however (it’s) more widespread obviously.”

This widespread damage includes damage to roofs and broken and downed trees.

According to Ms. Smith there were dozens of crews working on church properties as early as Sept. 14, and their efforts were in full force by Sept. 17.

“Diocesan representatives have visited every parish that has reported damage,” Smith continued. “The overall damage has been minor in the grand scope of things.

“As far as the total financial blow, it is not going to be catastrophic,” Ms. Smith assured her audience.

As for the rest of Houston, the real issue for most parishes was lack of electrical power. It was the key problem plaguing most Catholics schools in the archdiocese.

A handful of schools had opened at midweek and more were scheduled to reopen as they were reconnected to the electrical grid.

Ms. Smith shared more good news with everyone by updating the situation in Galveston. The island community took the brunt of Ike’s winds and rain, and there was some speculation that few, if any, church properties had survived the storm.

“The good news is that while we had thought Galveston was lost, Sacred Heart has no damage, St. Patrick has no damage. Our Mother of Mercy is still standing, though we don’t know the level of damage,” Ms. Smith said.