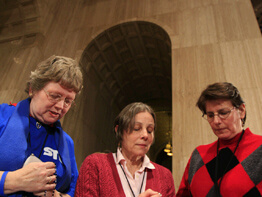 WASHINGTON – Despite the fact abortion has been legal throughout the United States for 34 years, there are “reasons for rejoicing,” primarily because of lower abortion rates and increased public opposition to abortion, said Cardinal Justin Rigali of Philadelphia.

Cardinal Rigali, chairman of the U.S. bishops’ Committee on Pro-Life Activities, was principal celebrant and homilist at a Jan. 21 Mass on the eve of the annual March for Life. It was held at the Basilica of the National Shrine of the Immaculate Conception in Washington.

“The rate and number of abortions in the United States continue to decline, most notably among teens,” he said to applause during the homily. He said many teens “are wisely choosing to abstain from sexual activity” because of religious and moral values and also to avoid sexually transmitted diseases.

“To be free of disease, to be free of the fear of an ill-timed pregnancy, to be free of a broken heart – this is the freedom that we want for our young people, and we rejoice that it is unfolding,” he added to further applause.

“Another reason to rejoice is that the American people are becoming more pro-life. According to a significant poll last year, general support for Roe v. Wade fell under 50 percent for the first time since 1973,” Cardinal Rigali said, eliciting more clapping.

“More and more citizens are coming to question abortion and to recognize – as a starting point for deeper conversion – that there is something radically wrong with abortion and the support given it by our laws,” he added.

“In the midst of the enormous challenge posed by threats to life, there are new reasons to hope that the truth of God’s law will prevail as a great light in our nation as our people move increasingly toward valuing human life from its earliest and most vulnerable stages onward. This indeed is cause for rejoicing in the Lord!”

The church’s position on abortion is “one of profound concern for the unborn and deep compassion for all those affected by abortion,” Cardinal Rigali said. “With utmost respect we express in the public debate our strong conviction that something terribly wrong has weakened our nation – something that flagrantly violates human rights and human dignity, in addition to the law of God.”

The cardinal blasted “the so-called freedom of choice” that resulted from the Supreme Court’s Roe v. Wade decision in 1973, which legalized abortion virtually on demand, saying that those who get abortions do not experience freedom.

“Freedom comes only when they are able to turn to God in their sadness and brokenness and accept his forgiveness, his mercy and his healing grace,” Cardinal Rigali said. “They become truly free when they are able to acknowledge the truth of the wrong that they committed, and the greater truth that there are no limits to God’s loving mercy or to his desire for our salvation. Jesus himself tells us: ‘You will know the truth and the truth shall set you free.’”

Despite an afternoon snow that slickened Washington’s streets, the shrine was again filled to capacity with worshippers who had set out from home in chartered buses long before winter’s first snowfall in the nation’s capital.

Worshippers, many of them students, also crammed the back vestibule and the side chapels of the shrine, and filled up its lower level as well. Many of them wore T-shirts or sweatshirts with pro-life slogans, although some wore replica jerseys bearing the name and uniform number of their favorite sports star.

With the crowds in the upper church and on the lower level, the shrine estimated the number at 10,000.

Cardinal Rigali told the young people, “You are called to fulfill a special role: to bring all your energy to promote the cause of life. The Lord is calling you and confirming you in strength. The church and the nation are asking you to rise up to this challenge.”

Sen. Sam Brownback, R-Kan., who had announced his candidacy for the Republican presidential nomination Jan. 20, drew cheers when he was spotted inside the shrine for the Mass. Outside, Brownback, who became a Catholic in 2002, talked with supporters, signed autographs and posed for photos.