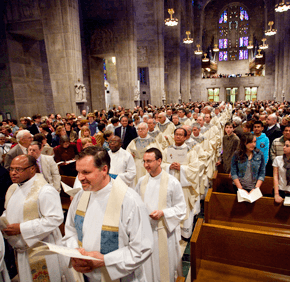 By Maria Wiering
mwiering@catholicreview.org
Cardinal Edwin F. O’Brien celebrated his last chrism Mass in Baltimore April 2 at the Cathedral of Mary Our Queen before pews filled with laity and religious from across the archdiocese. The annual Mass includes the blessing and consecration of oils used for sacraments and rites during the upcoming year and a renewal of promises for priests.
In his homily, Cardinal O’Brien gave a brief history of the chrism Mass, which has roots in the early church, and was celebrated during Holy Week, first on Holy Saturday and then on Holy Thursday, the day it is still celebrated at the Vatican. “
The word ‘Christ’ comes from this (chrism) oil, for ‘Christ’ means ‘anointed one,’ ” he said. “In baptism, confirmation and holy orders, each person becomes increasingly ‘Christ-ed’ – more fully resembling and, indeed becoming, in a deeply spiritual and interior way, the person of Christ himself.”
Auxiliary bishops Mitchell T. Rozanski and Denis J. Madden concelebrated the Mass, along with more than 140 priests. More than 70 deacons also participated in the Mass.
After the priests’ renewal of promises, designees presented Cardinal O’Brien with three silver vessels containing the oils to be blessed and consecrated. Seven representatives from Camp GLOW, a camp for adults with disabilities funded by the archdiocese, also participated in the presentation of the gifts.
At a table reserved for the oils, Cardinal O’Brien prayed over each vessel, first blessing the Oil of the Sick, which is used in the anointing of the sick, and the Oil of Catechumens, which is for those preparing to join the Catholic Church.
Unlike the other two oils, which are blessed, chrism is consecrated. When Cardinal O’Brien came to the third oil, he poured perfumed balsam into the vessel, mixing it with the olive oil with a long spoon. He then removed his miter, leaned over the vessel and breathed onto the sacred chrism as a sign of the Holy Spirit. The chrism will be used for baptism, confirmation and holy orders.
The prayers of the blessing and consecration rite include imagery of the role of the olive tree in Sacred Scripture, starting with the trees God commanded to bear fruit in creation, and citing David’s praise of the tree’s oil, the olive branch as a sign of peace to Noah, and Moses anointing his brother Aaron as a priest, before ending with Jesus’ baptism in the Jordan.
“In this you clearly fulfilled the prophesy of David, that Christ would be anointed with the oil of gladness beyond his fellow man,” Cardinal O’Brien prayed.
Catherine Combier-Donovan, the director of the archdiocese’s Office of Worship, found the prayers particularly striking with the new Mass translation. “It was earthy and beautiful,” she said.
The oils were later distributed among vessels for each parish.
In his homily, Cardinal O’Brien also thanked his priests, who realized the hopes he had for them when he took charge of the archdiocese nearly five years ago, he said.
He also praised Archbishop William E. Lori’s recent appointment to Baltimore. “He will prove to be a prayerful, intelligent and zealous shepherd, and a ready friend to you, his brothers, as he has been to me for many years,” he said.
At the end of the Mass, Cardinal O’Brien again thanked the archdiocese’s priests, who received a standing ovation from the congregation.
Members of St. Paul in Ellicott City filled three of the Cathedral’s pews at the evening Mass. Among the parishioners were six catechumens and candidates preparing to enter the Catholic Church at the April 7 Easter Vigil Mass, including candidate John Veach, 44. He married into a Catholic family, he said, and has been going to Mass for 10 years. This year he decided to enter the church, and is approaching Holy Week with gusto.
“This is the last week, this is the last rush. I’m trying to hit it on all cylinders this week,” he said.
After the Mass, the clustered parishes of Crucifixion, Good Shepherd and Holy Trinity in Glen Burnie hosted a “tailgate party” with snacks in the Cathedral’s parking lot. Crucifixion parishioner Emily Sadler, 19, has attended the Mass and tailgate for the past five years, since she was preparing to be confirmed, she said. The people and the fellowship bring her back each year, she said.
“It’s also an opportunity to support the priests and their vocations,” added her mother, Patti Sadler.
PrevNext