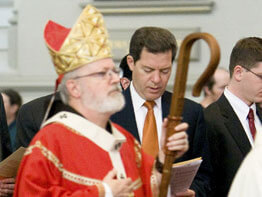 “There is no other presidential candidate in the U.S. today that more reflects Catholic social doctrine as you do,” the cardinal said after Brownback addressed an Oct. 14 luncheon following the annual archdiocesan Red Mass.

“Your words are not from a politician posturing, but a reflection of your faith,” the cardinal said.

Brownback, who ended his presidential bid Oct. 19, became a Catholic five years ago. After serving two years in the House, in 1996 he ran for and won the seat that Sen. Robert Dole, R-Kan., gave up to run for president. In 1998, Brownback won a full Senate term and was re-elected in 2004.

He told the luncheon crowd at the Park Plaza Hotel in Boston that as someone raised as a Protestant he was confused when the cardinal first invited him to speak at a Red Mass.

“I thought, isn’t that communism? Shouldn’t I be against that?” Brownback said.

The Red Mass is the popular name for the Mass of the Holy Spirit, in which God’s blessings are invoked upon judges, attorneys and all those working in the fields of canon and civil law.

In his address, Brownback said he is working to expand the role of people of faith in the public square and the acceptance of faith as a legitimate motivation for public acts.

Politicians such as former Presidents Jimmy Carter and Ronald Reagan and current President George W. Bush have shared the role of faith in their lives and embraced the faith community. They were derided, but they won, he said.

An ardent supporter of the rights of the unborn, Brownback said he is especially motivated to pro-life work by the slaughter of Down syndrome children in the womb.

“Ninety percent of them are killed in the womb. The next time you see a person with Down syndrome give them a hug,” he said.

Brownback said he is sponsoring a bill to set up a federal adoption program for these children to encourage parents to spare them. The bill is co-sponsored by Sen. Edward M. Kennedy, D-Mass.
“We are winning the abortion debate,” he said.

In the past, Brownback said he never allowed himself to believe that the Roe v. Wade decision could be reversed, but two developments have him convinced.

“Eighteen- to 25-year-olds are the most pro-life age group,” he said. “The right to an abortion will be overturned. There is no right to abortion in the Constitution.”

Brownback said, “We are one vote on the Supreme Court away (from overturning Roe) – I would love to be the president who appoints that vote.”

Cardinal O’Malley celebrated the Red Mass at the Cathedral of the Holy Cross in Boston and the homily was delivered by Father James M. DiPerri, who teaches at Weston’s Blessed Pope John XXIII Seminary.
In his homily, Father DiPerri said Catholics are called to spread the good news.

“Paul was in chains, but the Gospel is not,” he said. “Not just on Sunday, but bring God’s church to our workplace and everyday lives.”