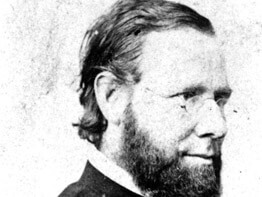 NEW YORK – Paulist Father Isaac Thomas Hecker was “a real-life saint like you and me,” Cardinal Edward M. Egan of New York said Jan. 27, describing the founder of the Paulist Fathers.

“He was a person who suffered, who made his way through life bearing crosses and who taught that sanctity can be captured in many different ways,” the cardinal added.

He made the comments during a Mass that marked the opening of the cause for Father Hecker’s canonization and the 150th anniversary of the Church of St. Paul the Apostle, the parish he established on Columbus Avenue in New York.

More than 1,000 people attended the bilingual Mass, concelebrated by several priests. Before the processional, Cardinal Egan blessed the tomb of Father Hecker, which is inside the church in the northeast corner.

In his homily, Cardinal Egan traced the “troubles and tribulations” that led Father Hecker to found the Paulists as a distinctly “American approach to announcing the Gospel.”

He said the native New Yorker was born in 1819 to German immigrant parents. He escaped a yellow fever epidemic, nearly died of smallpox and carried its physical scars throughout his life. He worked with his older brothers in their successful bakery and flour business, but did not have an interest in commerce. He was disappointed with the outcome of political causes he supported.

“He had trouble finding his place and he didn’t understand the mystical experiences he had,” Cardinal Egan said.

Father Hecker was raised as a Methodist and explored several denominations before becoming a Catholic when he was 24 years old. Five years later, he was ordained a Redemptorist priest in Europe and preached well-attended missions in England and throughout the eastern United States.

Father John Duffy, president of the Paulist Fathers, said it was Father Hecker’s “driving conviction that if the principles of freedom and democracy of this country were combined with the teachings of Jesus Christ as proclaimed by the Catholic Church then America could become a light to the nations.”

Cardinal Egan recounted that Father Hecker’s vision was incompatible with that of his religious superiors in Rome and he was dismissed from the Redemptorists. Fortunately, said Cardinal Egan, Father Hecker had the support of Pope Pius IX, who encouraged him to establish a congregation of priests dedicated to evangelizing North America.

In 1858, Archbishop John Hughes of New York gave a parish to Father Hecker and his fledgling order, formally known as the Missionary Society of St. Paul the Apostle. It was the first religious congregation of Catholic men established in the U.S.

The sainthood cause of Father Hecker was formally opened after the conclusion of the Mass.

The priest participants exchanged their liturgical vestments for clerical garb and returned to the sanctuary where Cardinal Egan sat at a large table adjacent to the altar. Paulist Father Gilbert Martinez, pastor of the Church of St. Paul the Apostle, explained that the ceremony to open a sainthood cause is “not usually done in public. It’s more of an administrative procedure.”

Paulist Father Paul Robichaud, postulator of Father Hecker’s cause, officially requested that Cardinal Egan initiate the archdiocesan inquiry into “the life, service and holiness of this servant of God.” With the formal opening of his cause, Father Hecker receives the title servant of God.

Cardinal Egan accepted Father Robichaud’s request, declared he was initiating the inquiry and would consult with his brother bishops and petition the Holy See. Cardinal Egan took the first of several oaths promising to fulfill his duties for the archdiocesan inquiry.

Father Duffy said Father Hecker was certain the Holy Spirit would guide the Paulists to meet the church’s needs in the modern age.

He said that the present-day Paulist mission consists of “evangelization, proclaiming the good news of Jesus Christ to the unchurched; reconciliation, reaching out to those who find themselves cut off from the community of faith and/or at the margins of society; seeking unity for the body of Christ and seeking dialogue with those of other world religions.”

“With Father Hecker looking over our shoulders, I am reminded of what he would say: God is not finished with us yet. The Holy Spirit has so much more to bring forth!” Father Duffy said.

The cause for the German-American saint was kicked off by the Irish-American cardinal speaking in English and Spanish to a multicultural group that enjoyed Italian pastries from Brooklyn at the back of the West Side church after the ceremony.