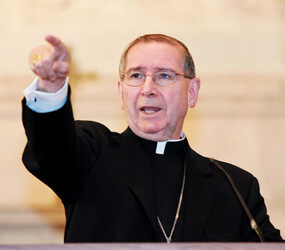 DETROIT – It was an event he witnessed while “still in grammar school” that helped shape Los Angeles Cardinal Roger M. Mahony’s concern for immigrants.

“I grew up in the San Fernando Valley, where my father operated a poultry processing plant that employed six or seven Mexicans. I was there when the Border Patrol raided our plant with drawn guns,” Cardinal Mahony recalled in an interview March 25.

He spoke to The Michigan Catholic, newspaper of the Detroit Archdiocese, about that childhood memory in California after delivering a talk at a downtown Detroit church in which he called for comprehensive reform of immigration law.

The Border Patrol made no arrests that day in 1948, because all of his father’s workers were legal, but the event helped launch the young Roger Mahony on a trajectory that would make him one of the Catholic Church’s foremost advocates for the rights of immigrants and agricultural workers.

“I’ve never forgotten that incident,” he said, adding that efforts to improve life for immigrants and agricultural workers have “always been part of my discipleship to Jesus.”

As a priest in the Diocese of Fresno, Calif., he became involved with Cesar Chavez, founder of the United Farm Workers, and in 1975 the Vatican gave permission for the newly appointed Fresno Auxiliary Bishop Mahony to become the first chairman of California’s Agricultural Labor Relations Board.

The head of the Los Angeles Archdiocese since 1985, the cardinal currently serves as a consultant to the U.S. bishops’ Committee on Migration.

He was in Detroit to deliver this year’s McElroy Lecture, an annual event of the University of Detroit Mercy School of Law. He spoke at Jesuit-run SS. Peter and Paul Church, built in 1844 and Detroit’s oldest church structure, which is adjacent to the law school’s buildings.

Acknowledging that he is not a civil lawyer, Cardinal Mahony nevertheless pointed out in his talk that American jurisprudence was shaped by the Judeo-Christian tradition. And he cited examples from Scripture in which God’s people were admonished to treat strangers well and justly, because they were once strangers in other lands themselves.

He noted that such passages can be found in Deuteronomy, Exodus and Leviticus in the Old Testament. And he cited the New Testament examples such as the words of Christ in Chapter 25 of St. Matthew’s Gospel (“For I was hungry and you gave me food”) and those of the St. James the Apostle.

For Christians, Cardinal Mahony said, there are no other considerations that could outweigh the message of Scripture: “We cannot turn our back to this legacy of hope.”

In the current situation, migrant laborers “help provide the labor to turn capital into profits,” but those without legal status often do not reap the full benefit of their labor, he maintained.

With illegal immigrants generally paying taxes, including payroll taxes that go to Social Security and Medicare, but typically never being able to collect such benefits, Cardinal Mahony said they are being subjected to an injustice.

He said there should be “a path to citizenship” for illegal immigrants, one that should require them to learn English, pay a fine and work for several years before attaining permanent status.

To continue to follow an “enforcement-only” policy, on the other hand, subjects illegal immigrants to exploitation, abuse and even death, as has happened in desert areas near the U.S.-Mexican border, he said.

“We are exacting a penalty that is not commensurate” with their situation, the cardinal said.

But Cardinal Mahony made it clear that he wants a path to citizenship for those illegal immigrants who would make good citizens. He endorsed prompt deportation for those convicted of committing crimes and for members of violent gangs.

“Do immigrants deserve a place at the table?” he asked.

“Yes, even in difficult economic times, we need to emphasize that immigrants are part of the human family,” he said. “From the church’s perspective, there is enough room at that table, especially since immigrants helped set that table.”