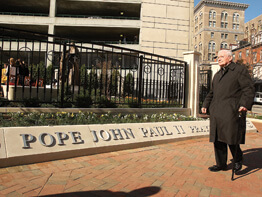 His late-morning visit came a day before he helped dedicate the long-awaited outdoor sanctuary in downtown Baltimore Oct. 23, but a steady stream of visitors was already strolling the grounds – many of them pausing prayerfully before a granite wall to read an inscribed quote on religious freedom from Pope John Paul II.

A young man sat on a bench with his head bowed while an elderly couple snapped photos of the greenery.

Surveying the scene as he held his cane, Cardinal Keeler smiled. For the man whose vision made the garden possible, this is exactly how he had hoped the garden would be used.

“It’s very clear that people are interested in it,” said Cardinal Keeler, who established the garden as a lasting tribute to the late Polish pope’s 1995 visit to Baltimore.

“This is going to be an historic place that will be able to be used for moments of quiet in a city that has so much noise about it,” he said. “I’m just delighted and thrilled. It’s an excellent project.”

The visit of Pope John Paul II to Baltimore on Oct. 8, 1995 had a tremendous impact on the city in lifting up religious freedom, Cardinal Keeler said.

“I pray that people of every background, of every race and creed will be able to use the garden,” he said. “Pope John Paul II himself was one who promoted interfaith harmony in a very personal way.”

It was a sometimes bumpy road to making the garden a reality. The archdiocese faced a lengthy struggle with a small group of historic preservationists who opposed tearing down a long-vacant, seven-story apartment building to make room for the garden. The dilapidated Rochambeau, built in 1906 and acquired by the archdiocese in 2001, was eventually demolished.

“The building that was there, as everybody in the neighborhood knows, was a dump,” said Cardinal Keeler. “Thank heavens, it is now history.”

The cardinal noted that the garden complements the Basilica of the National Shrine of the Assumption of the Blessed Virgin Mary and centers of Catholic outreach, including Catholic Charities’ My Sister’s Place and Basilica Place apartments for seniors.

Baltimore’s 14th archbishop said he has enjoyed watching the garden’s progress over the last six months. He can see it from his residence located behind the basilica on Charles Street.

At the dedication ceremony a day after strolling through the garden, Cardinal Keeler described the oasis as “holy ground.”

“May this garden reflect the splendor of (God’s) gifts of creation and show also your gifts of faith, hope and love,” he said.