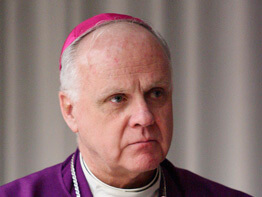 The changes were announced in Washington by Msgr. Martin Krebs, charge d’affaires of the Vatican nunciature.

Archbishop O’Brien will be formally installed as archbishop of Baltimore Oct. 1.

Cardinal Keeler, 76, had been beset with health problems in recent years, including a total knee replacement in 2005, a broken ankle resulting from a car accident in Italy in 2006 and brain surgery in June, believed to be related to head trauma during the accident.

He has been a bishop since 1979 and had headed the Baltimore Archdiocese for more than 18 years.

As a priest he worked as a civilian chaplain at the U.S. Military Academy in West Point, N.Y.; a military chaplain in Vietnam and at U.S. Army posts; vice chancellor and director of communications for the New York Archdiocese; secretary to Cardinals Terence Cooke and John J. O’Connor of New York; and seminary rector in New York and Rome.

Despite his health concerns, Cardinal Keeler remained active in leadership of the archdiocese and in a wide variety of church apostolates and social justice issues. He is known nationwide for his longtime role as episcopal moderator for Catholic-Jewish relations and also worked to improve relations with Muslims and Orthodox Christians.

But one of his proudest accomplishments in recent years was completion of the $32 million restoration of the Basilica of the National Shrine of the Assumption of the Blessed Virgin Mary in Baltimore, which was the first Catholic cathedral in the United States when it opened in the early 19th century.

At a morning press conference with Archbishop O’Brien in the historic basilica July 12, Cardinal Keeler said another high point of his tenure in Baltimore was “the wonderful response of so many people who wanted to assist in Catholic school education” through the Partners in Excellence program, which has provided more than 16,500 scholarships to Catholic schools since 1996.

But he said Archbishop O’Brien would continue to face challenges “making known the benefits of our Catholic schools.” More than 35,000 children in prekindergarten to 12th grade attend 86 Catholic schools in the archdiocese.

Archbishop O’Brien said he was told of the papal appointment July 3 and was “bursting” to tell family and friends during the July 4 holiday and the following weekend, but was sworn to secrecy. “The song that was running through my head was, ‘(Don’t) Ask Me No Questions, I’ll Tell You No Lies,'” he said. “Luckily, no one asked.”

He said he immediately said yes when Msgr. Krebs asked if he accepted the appointment. “I guess that’s one thing I take from the military,” he said. “When you’re given an order, you accept.”

But the archbishop’s voice broke with emotion as he spoke of the “deep sadness” he felt over leaving the military archdiocese, which includes 1.5 million Catholics serving in military installations around the world or at Veterans Affairs hospitals in the United States.

He called members of the U.S. military “a shining example of generosity” and said the approximately 300 Catholic priests in uniform were “a sterling example of the priesthood and a splendid credit to the Catholic Church.”

“I love the military. It has taught me so much,” said Archbishop O’Brien, who earned the rank of captain while serving as a chaplain in the Army from 1970 to 1973. “I hope to bring some of the gifts I’ve gained as a result of that to the Archdiocese of Baltimore.”

Cardinal Keeler deflected most of the attention at the press conference to Archbishop O’Brien, but did respond to a question about how he felt about the pope’s acceptance of his resignation, submitted when he turned 75 in March of last year.