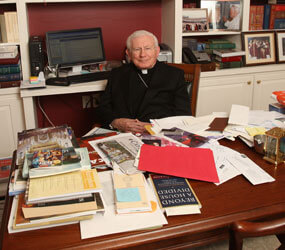 TIMONIUM – Sitting in his small apartment at Mercy Ridge Retirement Community in late February, Cardinal William H. Keeler was surrounded by reminders of a life given to his church.

A portrait of a young Cardinal James Gibbons, painted by George Peter Alexander Healy, was prominent in the living room, along with a painting of Healy himself. So, too, was a painting of the Chesapeake Bay by Father George W. Rutler of New York.

Perhaps among the most treasured objects were a large ram’s horn and a replica of a menorah that was installed at the Pontifical North American College in Rome – evidence of the cardinal’s special relationship with the Jewish community.

As he approached his 80th birthday March 4, Cardinal Keeler remained focused on many of the same priorities he has always held: promoting better relations between the Catholic and Jewish communities, celebrating Mass every day and staying in touch with friends.

Although he moves more slowly, the cardinal stays active. His desk is alive with documents – reading material that keeps him busy, he said.

Cardinal Keeler joked that he “thinks nothing” about become an octogenarian and doesn’t have much advice for others reaching his milestone.

Pope Benedict XVI accepted Cardinal Keeler’s retirement July 12, 2007 after the Baltimore archbishop led the Premier See for 18 years. At the request of Cardinal Walter Kasper, president of the Vatican’s Commission for Religious Relations With the Jews, the cardinal continued to work on ecumenical and interfaith endeavors in his retirement. He served in his longtime capacity as moderator for Jewish-Catholic affairs for the U.S. bishops before being succeeded by New York Archbishop Timothy Dolan in 2009.

Late last year, Cardinal Keeler was presented with a bronze medallion at Baltimore’s Jewish Museum of Maryland in recognition of his interfaith work and his support for a touring exhibition at the museum, “A Blessing to One Another: John Paul II and the Jewish People.”

The cardinal recently attended a spiritual retreat for bishops in the Diocese of St. Petersburg, Florida. He has also continued some pastoral outreach, celebrating Mass in November for prisoners at the Roxbury Correctional Institution in Hagerstown.

“I enjoyed the visit very much,” he said, “One of the aspects about it that pleased me was the fact that I was able to interact with the prisoners and spoke with them very freely.”

Because church rules demand it, once Cardinal Keeler turns 80, he will no longer remain a voting member of the College of Cardinals that gathers in Rome to elect the pope. He plans on returning to the Eternal City, however, to be present for the May 1 beatification of Pope John Paul II. The late pope visited Baltimore in 1995, largely through the efforts of Cardinal Keeler.

“The beatification will be a very great thing,” Cardinal Keeler said.

Asked if he misses the administrative work at the Catholic Center in Baltimore, the cardinal answered with a quick response.

Then he laughed heartily.