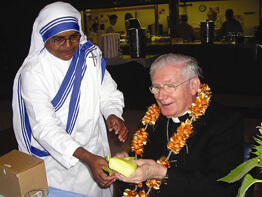 Essie Allen recognized the poignancy of Cardinal William H. Keeler’s homily for a Sept. 5 Mass at St. Wenceslaus celebrating the feast of Blessed Mother Teresa of Calcutta.
With the knowledge that the cardinal urged the Missionaries of Charity to open an AIDS hospice in the St. Wenceslaus convent in 1992 and welcomed Mother Teresa during her Baltimore visit that year, the East Baltimore parishioner said it was a fitting tribute that Cardinal Keeler would celebrate the Mass on the 10th anniversary of Mother Teresa’s death.
“It was very touching to see him up there,” she said. “His connection to Mother Teresa is so strong.”
As Cardinal Keeler prepares to step down as the leader of the Archdiocese of Baltimore at the end of September, he encouraged the congregation of about 100 faithful to follow Mother Teresa’s example of service to the sick and poorest of the poor.
The 8 a.m. service began with a recording of Mother Teresa’s voice and a portrait of the founder of the Sisters of the Missionaries of Charity was displayed in front of the pulpit.
During the hour-long Mass – which had song and piano accompaniment – Cardinal Keeler shared his memories of the candidate for sainthood, and he thanked the congregation for celebrating her charitable life.
During a breakfast reception following the Mass, the Sisters of the Missionaries of Charity presented the cardinal with a small statue of the Good Shepherd, as a token of their appreciation for his years of support to their Baltimore ministry.
“It meant so much to us to have him here on this day,” said Sister Mary Manorama, M.C., superior of the Missionaries of Charity house in Baltimore. “We are blessed.”
In addition to running a 10-bed AIDS hospice – where more than 100 have died in the past 15 years – the sisters also administer to the needs of poor and elderly throughout Baltimore, and run a summer Bible camp and after-school program for underprivileged children from the surrounding neighborhood.
“We are so grateful the sisters are here, giving their love and caring for the kids in this neighborhood,” Ms. Allen said. “A lot of the kids in this area are pretty much raising themselves, and the sisters are giving them an opportunity understand their homework, know they are loved and just be able to be a kid for a few hours. It’s within the spirit of Mother Teresa herself.”