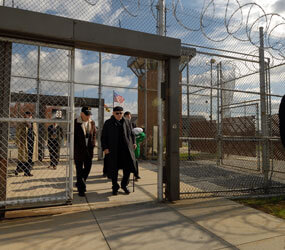 HAGERSTOWN – The attendees in the small room sat in plastic chairs instead of pews. Many were dressed alike, but that mattered very little to their honored guest.

Cardinal William H. Keeler celebrated Mass at the Roxbury Correctional Institution Nov. 7. The visit was arranged by Bob Lashinsky, a Catholic chaplain in the division of corrections.

Lashinsky said that when he sent the invitation, he did not expect Cardinal Keeler to actually find the time until possibly next spring, due to his busy schedule. When word reached the inmates that the Archbishop Emeritus of Baltimore would in fact be coming much sooner than expected, Lashinsky said their enthusiasm was immeasurable.

“They’ve all been excited the last week and half,” Lashinsky said. “It’s an inmate’s right to attend a Mass. To have the cardinal come in was a great experience for them.”

The Roxbury Correctional Institution houses about 1,700 inmates, including more than 100 registered as Catholic. The Mass was open to all registered Catholics, and was also attended by staff of the facility. After Mass, inmates were given the opportunity to take a photo with Cardinal Keeler.

He said that Lashinsky’s particular invitation stood out from others he receives, due to it being from a prison.

“I wanted to come out and visit with the prisoners,” Cardinal Keeler said. “Chaplain Bob indicated it would be great for me to come here.”

Cardinal Keeler, 79, said that this was not his first Mass celebrated in a prison. He indicated that he got a special feeling when celebrating a Mass in a prison, as opposed to in a church or chapel.

“The people at the Mass are closed in,” Cardinal Keeler said of the inmates who attended. “They can’t go freely where they want to go. I wanted to bring the liturgy to them.”

That was one of the reasons Lashinsky requested the cardinal’s presence. Lashinsky said he wanted to give the inmates the same honor that anyone else could receive if they decided to go to a Mass celebrated by Cardinal Keeler.

Emilio Fernandez, who played the guitar during the Mass, was among the inmates who treasured the moment.

“I’m a lifelong Catholic, and to have a Mass by a cardinal is an extraordinary experience,” Fernandez said. “I’ve performed in front of bishops and archbishops before, but never a cardinal. I was more nervous this time than any other time before.”

Michael Paris, a transitional deacon from Mount St. Mary’s Seminary in Emmitsburg, delivered the homily. He encouraged the inmates to have the courage to live for God and be saved from both sin and selfishness.

“We should ask God for the courage to live for Him, to pray every day, confess our sins, and live a life of service and love,” Deacon Paris told the congregation. “With the true courage God gives, we will find freedom and happiness in this life and in the life to come, a resurrected body that even a superhero would envy.”

Deacon Paris admitted he was nervous before the homily, but felt more confident as he delivered his message.

“It was intimidating at first, speaking in front of them,” Deacon Paris said. “Then I began to feel a connection with the guys. As I started reading it, I got more into it.”