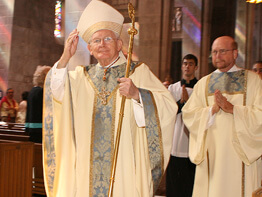 A few years ago, Dana Brower wasn’t sure if her son, Jonathan, would graduate from Calvert Hall College High School in Towson.

Facing serious financial difficulties, the family didn’t have a way to pay tuition, she said. So Mrs. Brower met personally with Cardinal William H. Keeler and told him of her plight. Through his intercession, Jonathan graduated from Calvert Hall and is now a history major at The Johns Hopkins University in Baltimore.

Mrs. Brower and Jonathan were among the hundreds of Catholics from throughout the Archdiocese of Baltimore who gathered at the Cathedral of Mary Our Queen in Homeland Sept. 23 to witness Cardinal Keeler’s last public Mass before the Oct. 1 installation of Archbishop Edwin F. O’Brien as the 15th archbishop of Baltimore. They came to thank the cardinal for his ministry and extend their best wishes for his retirement.

Standing outside the limestone cathedral as loud bells pealed joyfully overhead at the end of the liturgy, Mrs. Brower clutched her son’s Calvert Hall yearbook and said Cardinal Keeler has been a man who cares deeply about the people of his archdiocese.

“He was so kind to our family,” said Mrs. Brower, a St. Ursula, Parkville, parishioner who shook the cardinal’s hand and snapped a photo of him with her son.

“As a mother, I’ll never forget him,” she said. “You can look at his face and see the kindness that’s there. You don’t find many people like that.”

Jonathan called Cardinal Keeler “one of the great people” in the church, and said he felt like he was a part of history to attend the prelate’s special Mass.
Bernadette Goggins, a cathedral parishioner, said the cardinal has been a “very pastoral” leader who has reached out to people of other faiths during his 18 years as leader of the premier see – the third-longest-serving archbishop in the 218-year history of the archdiocese.

“He makes everyone feel involved in the church,” she said.

Carmelite Coombs, a parishioner of St. Jude Shrine in Baltimore, called the liturgy an important celebration she wouldn’t miss for the world.

In his homily, Cardinal Keeler reflected on the historical nature of the Archdiocese of Baltimore and the religious significance of the basilica that was recently restored to the original vision of Archbishop John Carroll and Benjamin Henry Latrobe. The cardinal said one of the highlights of his years in Baltimore was the visit of Blessed Mother Teresa of Calcutta to Baltimore in 1996, a year after Pope John Paul II also visited Charm City.

At the end of the liturgy, Bishop Mitchell T. Rozanski, eastern vicar, thanked the cardinal for his service, saying, “You have led us to open our hearts to the needs of others.”

After receiving a standing ovation from the congregation, Cardinal Keeler acknowledged the applause with a smile.

“All we have done is try to ask you to be like Jesus,” he said.

Although he is retiring, Cardinal Keeler plans to remain quite active. In October, he will go to Ravenna, Italy, as part of the International Catholic-Orthodox Commission. He also will continue serving as moderator for Jewish-Catholic affairs for the U.S. bishops, he said.