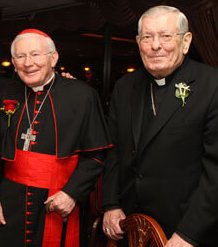 Standing on the 16th floor of a downtown building overlooking the archdiocese he served for 18 years as archbishop, Cardinal William H. Keeler personally greeted scores of well-wishers who had come to celebrate his 80th birthday March 2.

Held two days prior to his actual birth date, the Center Club celebration attracted friends and family from across the archdiocese, around the country and around the globe.

Whether they were secretaries who kept his Catholic Center office running or dignitaries like the pope’s apostolic nuncio to the U.S., each had a chance to reminisce personally with a man they had come to know and love.

“You have been and continue to be a star,” Archbishop Sambi said, “a light of hope, not only for the church, but also for the community at large.”

The restoration produced a “grand, lasting beacon shining light back at our Catholic history and heritage,” Berndt said, “and shining an equal brightness forward to the power and certainty and strength of our church for the centuries of the church yet to be lived.”

Cardinal Theodore McCarrick, retired archbishop of Washington, said Cardinal Keeler was much respected among his brother bishops. The Baltimore cardinal is a former president of the U.S. Conference of Catholic Bishops.

In honor of Cardinal Keeler’s birthday, Archbishop Edwin F. O’Brien made a personal donation to the Cardinal William H. Keeler Endowment Fund. Established when the cardinal retired in 2007, the fund is designated for tuition assistance; care of the poor; preservation of the basilica; and ecumenical and interfaith affairs – all priorities during the cardinal’s tenure as archbishop.

Archbishop O’Brien recounted a story in which a young seminarian named Bill Keeler told a family member that the reason he wanted to be a priest was because God had given him life and he wanted to give his life back to God.

“He is a man of great strength,” Archbishop O’Brien said, “strength of will, strength of spirit and strength of body – and he’s still giving it his all.”

Rabbi Mitchell Wohlberg of Beth Tfiloh Congregation in Baltimore, noted that in the Jewish Bible, the only mention of a birthday was for the “good Pharaoh” who turned 80.

“Cardinal Keeler is no king like Pharaoh,” Rabbi Wohlberg said. “He’s just a prince. A prince of the church and a prince of a man.”