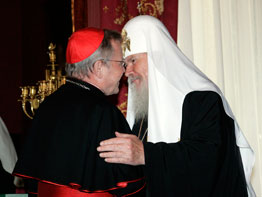 VATICAN CITY – The Vatican’s top ecumenist gave an upbeat report on his recent meetings with leaders of the Russian Orthodox Church, saying historic tensions have been replaced by an eagerness to cooperate.

“We’re at the beginning of a new situation and a new reality, in which the confrontation of the past seems to have vanished,” Cardinal Walter Kasper said after his 10-day visit to Russia at the end of May.

“Everything seems to point in the direction of a possible meeting between Pope Benedict XVI and Patriarch Alexy II (of Moscow.) There is not a concrete agenda, but there are many signs of reconciliation,” the cardinal said in an interview June 3 with the Vatican newspaper L’Osservatore Romano.

Cardinal Kasper traveled to Russia at the invitation of Metropolitan Kirill of Smolensk and Kaliningrad, president of the Russian Orthodox Church’s office for ecumenical relations. The trip featured a meeting with Patriarch Alexy and visits to Orthodox centers in four major cities.

Cardinal Kasper said he received a warm welcome that would have been unthinkable a few years ago.

“Many things have changed for the better, there’s no doubt about it. The Orthodox are seeking cooperation on Christian values, on the common roots of Europe, on moral witness, on themes like the family, bioethics and human rights,” he said.

He added that the Russian Orthodox have great esteem for Pope Benedict.

“Everyone here trusts him, and for this reason one can hope that the doors will open, even if the road is still long,” he said.

Cardinal Kasper said the new Catholic archbishop in Russia, Italian-born Archbishop Paolo Pezzi of Moscow, was well-liked by the Orthodox – another element favoring the climate of dialogue.

While highlighting the positive aspects of his visit, Cardinal Kasper also pointed to a major obstacle in Catholic-Orthodox dialogue and indicated that his talks failed to resolve it.

Cardinal Kasper said it was essential for the Orthodox churches to work out their disagreement so that Catholic-Orthodox dialogue can move forward.

“The solution needs to be found, and quickly, because otherwise every effort is in vain. If the Russians don’t participate it will be difficult, if not impossible, to continue this dialogue,” he said.

On a related issue, Cardinal Kasper said he had questioned his Russian Orthodox hosts about the fact that their church has created its own sub-commission to study the question of papal primacy. The cardinal said his concern was that this might be at odds with the promising document on papal primacy issued by Catholic and Orthodox participants at the Ravenna meeting last year.

Cardinal Kasper said he was given assurances that the Russian Orthodox study would be a deep and serious one.

The cardinal said he was particularly impressed when he met with Russian Orthodox university students. He said they were well-informed about the Catholic Church and eager to learn more, and have set up a Web site dedicated to improving the understanding of Catholic theological texts.